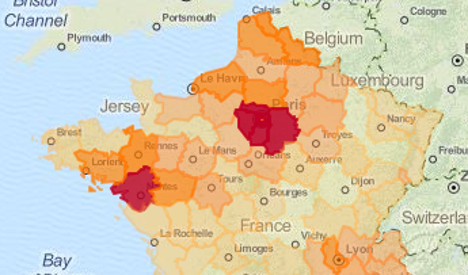 The area around Paris and parts of western France appear to be the worst hit. Image: Essence smartphone app

The fuel crisis rumbled on in France on Friday although industry chiefs tried to calm fears by insisting France had plenty of fuel.

With unions protesting the government's labour laws continuing to block refineries and fuel depots, motorists were still having to queue for fuel in many areas although it appeared the crisis was easing slightly.

While new unofficial maps suggested Paris and parts of the west of France were still badly hit, with some 80 percent of petrol stations running low or empty, the head of France’s petroleum industry said the country was a long way from a nationwide shortage.

Francis Duseux from the French Union of Petrol Industry said: “The situation is fraught in certain regions, but we are a long way from a national shortage.”

The smartphone app Essence, which has been publishing a real time map of the shortages across the country claims around 5,300 out of the country’s 12,000 petrol stations are either empty or running low.

Other estimates put the figure at somewhere between 25 and 30 percent of all petrol stations. Several regions have imposed caps on the amount of fuel drivers can purchase in order to ensure stocks last longer, but in the west of France those limits were lifted on Thursday as petrol stations were refilled.

French oil giant Total, which runs 2,200 stations around France, said 353 of them were empty, 431 partially empty, and 72 taken over by authorities for priority usage.

However, with the fuel tankers able to access depots again and with the general panic to refill from the public abating, things are looking brighter for the weekend.

But it's still a long way from normal, as the map below of petrol stations with fuel shows.

However many say the maps do not fully reflect the reality and that the situation is different on the ground.

UFIP’s Duseux says France is well prepared to cope with the ongoing crisis that he says has been exacerbated by motorists panicking.

“If we look at France’s reserve stocks there are around 112 to 115 days-worth of fuel. We have a very sophisticated logistics system.

That's unlikely to ease worries among those holidaymakers heading to France next week and indeed the tens of thousands of fans that will pour into France for Euro 2016 which starts on June 10th.

And to make matters worse on Friday, the trade unions that have orchestrated the blockades of fuel depots and oil refineries, led by the hardline CGT, called for actions to be stepped up.

Their protests are motivated by a desire to force the government to drop its controversial labour market reforms that unions claim favour businesses over the rights of workers.

In a joint statement on Friday they called on workers to “continue and step up their action” as they attempt to turn up the pressure on François Hollande’s Socialist government.

With just two weeks until France hosts the Euro 2016 football championship, the country has been gripped by more than a week of rolling strikes that have disrupted transport and sparked fuel shortages.

“The strength of the statements given by the government, their… stubbornness in not withdrawing the draft legislation are boosting the determination” of the union movement, the statement said.

Although some blockades on fuel depots and refineries in the north of the country were called off on Thursday, many motorists were still stuck in long queues at petrol stations around France.

Unions say they have popular support for the protests and they were cheered by a poll carried out on Thursday that showed nearly two-thirds of people believe the action is “justified”.

President François Hollande however vowed not to bow to pressure and told reporters at a G7 summit in Japan.”I will stand firm because I think it is a good reform,” 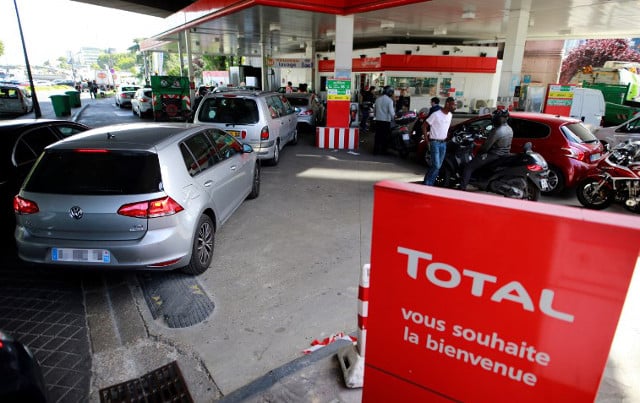 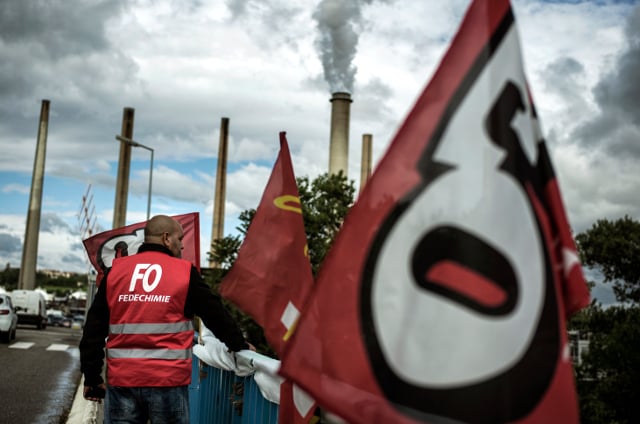