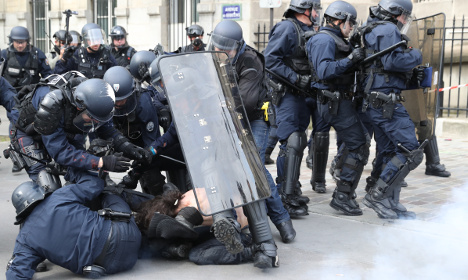 Police and protesters also clashed in Paris last week. Photo: AFP
They were among around 100 people who broke away from a demonstration and set about smashing shop windows and parked cars in a side street, he said.
The clashes occurred near the Reuilly-Diderot Metro station to the east of Paris.
A police source told Le Figaro newspaper that glass bottles had been thrown at officers.
A journalist at the paper said that both the attackers and those covering the story got sprayed with tear gas.
“The protesters were pushed up against the shop windows, loads of people were crying and were panicking,” the reporter said.
Tweets from the scene showed damaged shop windows, with some protesters even apparently targeting car dealerships, where they smashed windows and sprayed graffiti on the vehicles.
Officially the movement is in protest against the labour reforms that are aimed at freeing up the country’s rigid jobs market, partly by making it easier for companies to sack workers.
The reforms have prompted months of protests, and nationwide strikes across France this week that have affected trains, flights, nuclear power, fuel depots and particularly oil refineries.

Things have also kicked off in other cities in France, notably in Lyon where protesters have also clashed with police (see tweet below).
Protesters have also taken to the streets of southern Toulouse, where strikes at the airport have seen almost 20 flights cancelled so far on Thursday.

READ ALSO: Who are the masked rioters causing havoc in France?