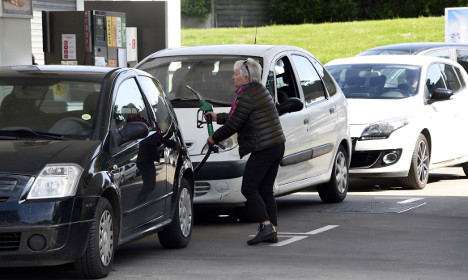 Motorists in France spent another day queuing for petrol or desperately checking smartphone apps to find a petrol station near them that has fuel (see the best apps for finding petrol here).

The worsened on Thursday with more workers joining strikes as part of the eighth day of mobilisation against the government’s unpopular labour reforms.

Unofficial estimates on early Thursday evening suggested at least 5,143 out of the 12,000 petrol stations in the country were without fuel or running low.

With over 40 percent of petrol stations affected by shortages it was becoming harder and harder to get fuel.

Maps produced by the smartphone app Essence show how the crisis has spread across the country in recent days. Compare the map below of the number of petrol stations running out of fuel on Thursday compared to the Monday (second map below).

CLICK HERE for an interactive version of the map (Petrol stations with shortages on Thursday) (The same map on Monday)

Local authorities around the country have been forced to impose caps on the amount of petrol drivers can purchase, with most limits set at 20 litres.

However authorities in Brittany lifted the rule on limits on Thursday, thanks to the fact that supplies had got through to petrol stations.

On Wednesday, watched by 80 striking workers, riot police used water cannons to move burning tyres blocking access to a key oil depot in Douchy-les-Mines near the Belgian border that had been in place since last Thursday.

The Prime Minister Manuel Valls said more refineries and depots would be “unblocked” in the coming days.

But five out of the country’s eight oil refineries were still hit by strike action on Thursday with the government admitting it had been forced to dip into its strategic reserves.

CGT leader Philippe Martinez has vowed to continue the action until the labour legislation is withdrawn.

And polls suggest that despite the disruption to motorists, much of the French public back the strikers.

Queuing for petrol at a Total station in Paris, motorist Benjamin, who lives in Saint-Lô, told The Local: “I’ve already been waiting for 35 minutes. I need petrol to get home because I live 400km from here. I support the strikes. The government is at fault. I’m not irritated by those protesting.”

On Wednesday an opinion poll suggested a majority of French people would like to see the labour reforms bill scrapped if it meant the strikes and the blockages came to an end.

However on Thursday morning the embattled Prime Minister Manuel Valls insisted the bill would not be withdrawn.

“The withdrawal of the bill would show its impossible to govern. This country is dying from its inability to reform,” he said.

Valls did however suggest the government would be open to modifying the reform, again.

READ ALSO: Why both sides despise the labour reforms bill