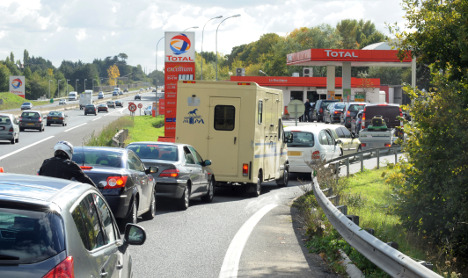 Photos: AFP
On Wednesday President François Hollande said everything would be done to ensure the French people and the country's economy get the fuel it needs.
But authorities are running out of time as real concerns are being raised about the impact of the fuel shortages across the country.
An umbrella group of French business leaders issued a joint statement on Wednesday saying transport strikes and problems with fuel supply were “beginning to impact economic activity in our country”.
“We, representatives of companies, are today sounding the alarm signal,” they wrote in a post of Facebook.
“This situation can not continue without serious consequences for companies but equally for employees, who are faced with increasing daily difficulties. The current escalation goes beyond what is acceptable in a protest movement. Violent words and actions are not legitimate.”
The unions urged strikers to “measure the consequences of their actions in a difficult economic environment leading to isolationism”.
On the ground companies said the fuel blockades were starting to hit their business.
“It's beginning to get to a critical point,” Pascal Barre, who runs a logistics firm in Poincy, east of the capital told AFP.
“We filled up at the end of last week and at the beginning of this week but our drivers need to fill up again and it's not possible.”
Philippe Waechter, chief economist at French investment bank Natixis, also warned of “consequences”.
“Everyday activity could quickly be disturbed. From the moment transport is blocked, there are a certain number of services which cannot function. The question is how the conflict will evolve,” he told the AFP.
Indeed, there are already serious concerns for business after French oil giant Total found itself in the middle of the protests.
The CEO of the group, which has seen blockades at five refineries that it runs in France, has already said the group will “seriously review” its domestic investments.
“If our colleagues want to take an industrial asset hostage for a cause that is foreign to the company, you have to ask whether that is where we should invest,” CEO Patrick Pouyanne told reporters on the sidelines of a shareholders' general meeting.
“In any case, we should reflect clearly on the question, both the management and the board of directors,” he said. Households
Alexander Mirlicourtois from economic think tank Xerfi said that strikes can have indirect effects on the economy.
“If the conflict is here to stay, it may lead to households building up a kind of precautionary saving while they wait to see how it unravels,” he told Le Figaro newspaper.
Small businesses
Many companies are already feeling the pinch from the strike – which Mirlicourtois warns could get worse if company bosses start taking more cautious attitudes towards development.
Those on the ground, such as Francois Gelin, who runs a small heating and plumbing business close to Paris, are already getting hit and hard by the fuel shortages.
“We are worried. For the past day or so, it's taken an hour or two to refill,” he told Le Depeche du Midi. His employees take numerous daily trips and the strikes are slowing the company down.
The President of France's General Confederation of Small and Medium Businesses, François Asselin, didn't hold back.
“When you consider the ferocity of the international market, we are infuriated by this national sabotage,” he said.
Farmers
The FNSEA , France's main farmers' union, made a request to the government on Wednesday asking to be given priority in receiving fuel supply, in order to protect their trade against the effects of the strikes.
“The FNSEA request the government to grant waivers which are necessary to keep the farming sector going,” the statement said, adding that it was a “critical time for the agricultural sector”.
“Farmers have already reported delays in receiving their supplies, as well as in the delivery of their products. For products such as horticulture or fruit and vegetables, a large part of annual sales takes place over the coming weeks. Other products such as milk and meat, have a very short life span.” Maritime industry
Frederic Moncany Saint-Aignan, the president of the CMF which represents the maritime industry, told Le Figaro that workers need to get back to their jobs.
“The actions we have seen in these days are truly devastating, not only for the entire port sector but more widely for the French maritime economy,” he told the paper.
He added that France's maritime sector employs over 310,000 people and has a €70 billion production value.
The group urged strikers to return to work in order to “avoid a massive diversion of port traffic to competing European ports”.
Doctors
But it's not just the economy that’s being affected by the strikes. France's main union of doctors has also raised the alarm about the impact of the petrol crisis.
Doctors are concerned that their ability to pay house visits to patients will be hindered by the shortages of fuel and the long waits to fill up. They are demanding that local authorities ensure they have priority access to the fuel pumps when needed and that doctors are not subject to the caps on purchases that have been installed in many parts of the country.
No long term effects?
Some experts, however, don't agree that there will be long-lasting effects on the economy.
Mathieu Plane, a researcher at France’s Economic Observatory (OFCE), said it's rare for social movements to have a long-term impact on the economy.
He pointed to the strikes of May 1968, when GDP fell by five percent in one quarter and investments by 20 percent – but things were back to normal by the next quarter, which saw growth of 7.7 percent and a 32 percent rise in investments compensating for the affects of the strikes.