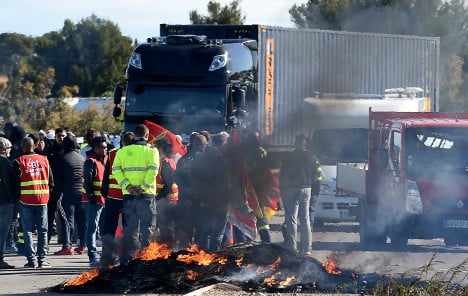 France appeared to be mired in a stand-off on Tuesday as one by one, petrol stations across the country ran out of fuel.

With around 25 percent of the country’s 12,000 fuel stations now reportedly running dry the crisis shows no sign of easing.

But how has it come to this? And whose fault is it?

At the heart of the confrontation is a battle between the hardline, leftist CGT trade union and the Socialist government who have rapidly fallen out of love with each other since President François Hollande's victory in 2012.

The relationship has been fraught for a long time thanks to the fact the union sees Hollande and his government as having betrayed their Socialist roots once in power, but the real rupture was provoked by the controversial labour reforms package that the CGT sees as favouring businesses over workers.

For the union it was the last straw.

So who is really to blame for the fuel crisis and ongoing strikes in France? https://t.co/M76JKtB334

Some say its waning influence has forced the union, led by the combative Philippe Martinez who is also trying to make his mark, to resort to ever more radical and militant methods.

The CGT, which has around 700,000 signed up members, declared open war against the government when the details of the labour reforms first emerged and it has vowed not to stop until the bill has been pulled.

Given that French governments have a history of scrapping bills under pressure from the street, it’s no surprise the CGT senses blood.

The problem is the numbers turning out on to the streets to show their anger over the labour reforms have been dwindling, so the CGT have ramped up their actions and resorted to the age-old French protest tactic of blockades.

And we should not be surprised.

“We are in a country where these kind of tactics are relatively common. They are part of our culture of protests and fairly accepted by the general public,” French historian Stephane Sirot told The Local. Sirot belives the CGT union has been pushed to take more militant action in order to differentiate itself from the more reformist unions in France like the CFDT, which called off its opposition to the labour bill after the government backed down on certain key issues.

The French government has made it clear where it believes the blame lies for the current crisis with ministers lining up to accuse the CGT of holding the public and the country’s economy hostage.

PM Manuel Valls said the union had resorted to “blackmail” and accused it of being undemocratic, while Hollande dismissed them as a “minority” only intent on “blocking”.

But even if the CGT may be losing its popularity, many in France, including frustrated drivers who have had to queue for hours for fuel, believe the government must carry its share of the blame.

Indeed a public opinion poll on Wednesday revealed that 61 percent of the French public laid the blame for the crisis squarely on the government.

From the very start the government appeared to be rushing the reforms through, without ever fully explaining them.

To make matters worse, they then backtracked on key points, a move that not only angered business leaders, but gave the unions the impression that they could perhaps force the government’s hand even further.

There’s no doubt what prompted the CGT to take more aggressive action was the government’s controversial, if unavoidable decision to use article 49-3 to force their labour bill through parliament without the usual vote by MPs.

“The French government has taken up a position that doesn’t allow for any negotiation,” said Sirot. “The use of 49-3, which is seen as being legal though not legitimate, has only accelerated the social movement.

“Not only has the government gone against public opinion and the social movement, but also against the will of parliament which would have voted against the bill because they don’t have a majority,” he said.

The historian also believes that the pressure France has been placed under by Europe to reform its job market has also played a role in creating the crisis.

President François Hollande has effectively been forced to respond to the wishes of the European Commission rather than his own voters, he says.

The good news is that Sirot believes the blockades and the protests and the strikes will slowly peter out through the summer, though not before they have caused widespread disruption to the public.