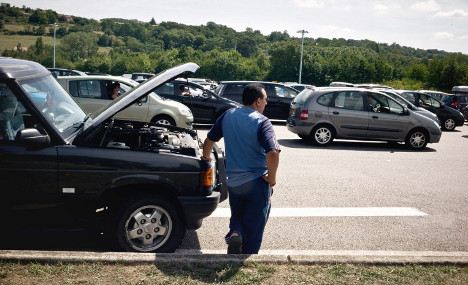 How to avoid the fuel crisis in France. Photo: AFP

Faced with a worsening fuel crisis, an on-going union dispute and long queues at petrol stations across the country, it’s not looking too positive for motorists planning to cross the Channel to France in the coming days, or for those already here.

There have been numerous reports of holidaymakers being unable to make it home because they have run out of fuel. Given that the hardest hit have been Brittany and Normandy, two regions popular with both tourists and those with second homes, it's no surprise many have been affected.

The AA have told The Local that “around half of the call-outs” they have had in France have been fuel related. The British Foreign Office has also issued a warning over fuel rationing and shortages in the north and northwest of France, which the RAC warns are now spreading to “the central, western and southern regions”.

As of Monday night, the transport minister said that 2,400 petrol stations out of 12,000 around the country were either out of fuel or running low. That marks a jump of nearly 1,000 from the morning and does not hold out too much hope for improvement in the coming days.

With half term holidays in British schools approaching, how can tourists plan ahead? (Filling up on cheaper petrol in Calais is not a great option anymore. Photo: AFP)

Set off with a full tank

It sounds obvious but the top tip being issued by the AA to those drivers setting off to France this weekend is to cross the Channel with a full tank, rather than expecting to fill up with cheap French fuel on arrival.

They say that a full tank should take drivers at least 300 miles (or 480 kilometres).

Rosie Sanderson, the AA’s international travel spokesperson advises, “The dispute shouldn’t stop UK drivers from changing their plans. Fuel is cheaper in France than in the UK and many drivers set off with low fuel and expect to top up when they arrive.  But this strategy could backfire, as petrol stations in the Channel ports are running out first.”

“If you are just about to go to France, you should fill up in the UK before your crossing to give you the best chance of reaching your destination in one go,” said fuel spokesman Simon Williams. Keep the tank topped up as you travel

The AA is also advising drivers to keep an eye out for petrol stations that are still selling fuel, so that they keep their tank topped up as they travel.

AA’s international travel spokesperson Sanderson added: “The dispute doesn’t mean that all fuel stations will find all their supplies exhausted, but I’d suggest that drivers keep topping up their tanks when they can rather than risk running out.”

“Keep an eye on the fuel gauge as well as keeping a look out for fuel stations that still have supplies.”

The RAC issued a warning that motorists should prepare themselves for long waits if they do manage to find a service station.

One way of finding out where the fuel shortages are is to keep up to date with the news or at least the right smartphone app.

For an up-to-date map of which petrol stations are open and which are partially or completely out of fuel, you can download the app Essence Comparateur Carburant or click on THIS LINK.

This seems fairly obvious too, but try to drive moderately and to economise on fuel in whatever way possible. Avoid heavy traffic, stick to the speed limit and drive at a constant speed.

“We’re also urging our members to moderate their driving to get the best fuel economy,” the AA told The Local.

“The only silver lining might be that there may be less traffic thanks to the dispute, meaning fewer traffic jams which will allow a car to travel further on one tank of fuel.” It would seem a good idea to transport some spare diesel or petrol in case of emergency if possible. However, for those motorists travelling by ferry rather than through the Eurotunnel, this could prove more difficult.

The AA points out that while Eurotunnel allows spare fuel to be carried in “designated for use/fit for purpose” containers, ferry operators generally don’t allow petrol in cans, but may permit diesel.

They advice motorists to contact their ferry operator for advice in advance.

Wait to come home if you’re low on fuel

If you need to fill up before your return journey, be wary of starting the trip back at all. The best option for a less stressful trip home is probably to wait until the crisis eases or until you are certain you can fill up your tank with enough fuel.

RAC fuel spokesman Simon Williams said “Anyone currently in France is going to struggle to find fuel for their return journey and probably shouldn’t even attempt to get home unless they can do so on one tank. We suspect finding somewhere to fill up in the worst affected areas will be extremely difficult.”

The RAC said that at the end of last week it had helped RAC members in France find fuel but that this is no longer possible.

The AA’s Lyon-based European call centre is already reporting that it is helping drivers who have run out of fuel in northern France.