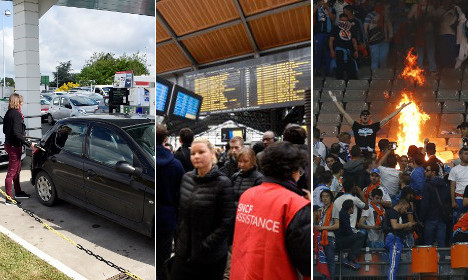 The organisers of Euro 2016 in France will be fretting even more on Monday.

Already concerned about the heightened threat from terrorism, their anxiety will have increased after a weekend that saw serious concerns about the new security plan at the national stadium, a growing fuel crisis as petrol stations across the country run dry, and threats of ongoing street protests and rail strikes.

While all the focus in the run up to the tournament has been on the threat from terrorists, it appears the biggest risk the tournament being a success comes from the ongoing protests against France labour reforms.

With hundreds of thousands of fans from across Europe set to descend on the country, the French government is facing some major headaches.

Fans to run out of fuel? The latest militant acts have seen oil refineries and fuel depots blockaded across the country which has provoked panic among drivers fearing a shortage.

Despite pleas to not all rush to the pumps, worried motorists have been desperate to get their hands on fuel and as a result some 1,600 petrol stations across the country had run dry, or almost dry, on Monday.

Thousands of fans will be already gearing up to head to France in their cars and the thought that they may have to queue for hours to get fuel or even worse, risk getting left high and dry on a French motorway, will have them sweating into their replica football shirts.

The government insists all will be fine and say they have plenty of stocks but the crisis is growing before their very eyes and unions have vowed that football is simply not as important as the livelihoods of French workers.

“The European football championships is not sacred. It’s an international competition. What is sacred is the fate of workers in this country and around the world,” former union leader Bernard Thibault told France Info radio.

With over two weeks to go before the start of the tournament there is plenty of time for France to refill its petrol pumps, but as we all know issues are rarely resolved quickly in the country.

Fans will hoping the government fulfills its vow to use all means necessary to break the blockades of fuel depots.

There is of course the alternative to travelling around France by car, with fans also able to use the excellent French train network except… The hardline CGT union which is leading the protest against the labour reforms are ready to up the ante just as the football kicks off.

The union, backed by other leftist unions like Force Ouvriere and several student groups have called for two nationwide strikes to be held, the second of which is scheduled for June 14th – four days after the opening game.

The strikes have particularly affected rail transport with the CGT well represented among rail workers. What will make matters worse is that workers with French rail operator SNCF will also be staging walk-outs in a separate protest over pay and conditions.

Unions representing rail workers have already announced rolling strikes to take place every Wednesday and Thursday, but for the CGT, that will become every day from June 1st.

On Monday the CGT union also called for RATP transport workers in Paris to join an “unlimited” strike from June 2nd. That could see services affected in the capital, which will stage 12 matches.

These strikes have already prompted severe disruption throughout the rail network and if they continue to be strongly followed by workers throughout June then fans could face real difficulties in getting around.

Security at the Stade de France

French authorities had a great chance on Saturday night to test their new security plan at the national Stade de France stadium, a plan that had been put in place after the stadium was targeted in the November terror attacks.

But after Saturday night's French cup final between fierce rivals PSG and Marseille was marred by crowd disturbances in and outside the ground, they admitted that there were several failings.

One of the more serious problems was that body searches on fans had not been as effective as they should have been.

Despite a metal fence around two metres high being erected around the stadium and filters that saw fans searched three times, supporters were able to get flares and other objects into the stadium.

Glass bottles were also among the objects illegally smuggled into the stadium.

Access to the stadium also proved to be a problem given that the number of entry points have been reduced from 24 to just four as part of the new security plan.

There were reports of severe crowd congestion on the route from the RER station at Stade de France and the actual stadium.

Local authority chief Philippe Galli admitted they have to go back to the drawing board and “re-calibrate” the plan for the stadium which will host seven matches during the tournament.

Interior Minister Bernard Cazeneuve promised that the security “failures” at the Stade de France would be put right before the tournament started.

He said “the movement of spectators” would be improved and searches would be increased after police were overwhelmed by a surging crowd on Saturday. Authorities will also be desperate that the tournament, which will see games staged in cities across France, will not be marred by the kind of street protests that have descended into violence in recent weeks and months.

The protests, which have seen hundreds of thousands take to the streets since they began in March, look set to continue with union leaders vowing not to give up their fight against the labour reforms.

Numerous demonstrations have ended in violence that appears to have been mainly been orchestrated by a hardcore of troublemakers.

However police have also been criticized for being violent towards protesters with several caught on video punching or kicking protesters.

All in all it has left the impression that the police have been unable to deal with a small group of troublemakers, with many social media commenters asking how could they possibly deal with outbreaks of football hooliganism?

But the main problem for the already over-stretched police will be that they won't want to have to deal with more anti-labour reform protests when they should be ensuring security of a tournament that will take place under the cloud of a real threat from terrorism.

That of course will be of no concern to unions whose main aim is to see the labour reforms bill scrapped and they are running out of time.

The French government is desperate for the tournament to pass off peacefully but it's clear authorities have more than just a terror threat to contend with.