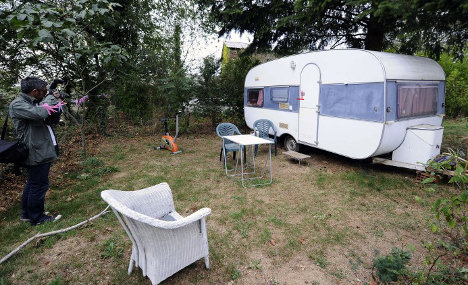 A French gardener goes on trial on Monday accused of murdering his British former boss and lover who disappeared
four years ago and whose remains have never been found.

Patricia Wilson, then 58, was last seen on the evening of August 17, 2012, when she was dropped off at her home in the village of Vabre-Tizac in the Aveyron region, near the southwestern city of Toulouse.

Police believe Jean-Louis Cayrou, then 50, killed the Englishwoman after she decided to end a brief relationship with him, and that he then disposed of the body.

Alerted by neighbours five days after her disappearance, police found large quantities of Wilson's blood around the property and in Cayrou's car, leading them to conclude she must have been killed.

The power at the house was cut but there was no sign of a break-in or ransacking, and intensive searches of the heavily wooded terrain in the area failed to produce a body.

Wilson, a former advertising executive, moved to the area with her partner Donald Marcus, also British, in 2008.

Marcus returned to Britain in 2011 for health reasons, leading the couple to separate.

Cayrou, who faces life in prison if convicted, lives in a nearby town and has worked as a gardener for several clients in the region since 2005.

A court heard in September 2014 that traces of Wilson's DNA had been detected on several blood-stained items found in Cayrou's car, where investigators also found an item of the victim's underwear in the glove box.

Prosecutors think Cayrou dragged her body from the house following a struggle.

Frequent trips by the gardener to the neighbouring Tarn region in the following days raised suspicions, along with changes to Cayrou's story during questioning.

He initially denied being at Wilson's house on August 17, then said he had been there and touched various objects, while denying any knowledge of the murder.

The prosecutor also said Wilson had been bombarded with phone calls from Cayrou ahead of her disappearance, the last coming at 8:57 pm on the evening she disappeared.

The prosecution has gathered testimony from friends of Wilson who say she had reported Cayrou acting violently towards her and attempting to suffocate her.

Cayrou has repeatedly proclaimed his innocence but turned himself in to police on August 23, and was charged two days later.

He was jailed then released on bail with and electronic tag in August 2013, but then sent back to jail the following month on appeal by the prosecution.

His lawyer Jacques Levy said Cayrou “like all innocent people” had defended himself badly, asserting that his client is being treated as guilty before proven innocent instead of the reverse.

“There is no other suspect, but have they looked for one?” he asked.

But Maryse Pechevis, who represents Wilson's mother and her former partner Marcus as civil plaintiffs, said: “There is really a lot of objective, corroborated evidence” against Cayrou.

“The trial will not necessarily allow mourning to begin, but it will move things forward,” she said.

It is set to last until Friday.