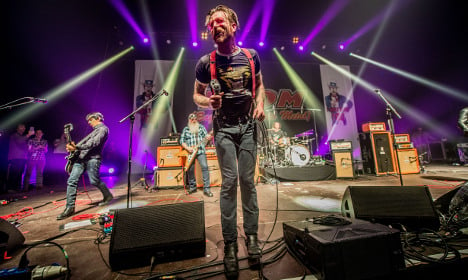 The Rock en Seine and Cabaret Vert festivals took issue with an interview by singer and guitarist Jesse Hughes, who renewed allegations that Muslim staff at the Bataclan club was involved in the attack.

“Being in total disagreement with Jesse Hughes' recent allegations given in an interview with an American media (outlet), both Cabaret Vert and Rock en Seine festivals have decided to cancel the band's performance,” said a statement by the two festivals, which take place in late August.

Eagles of Death Metal had briefly become heroes in France after Islamic extremists assaulted their concert, killing 90 people in the deadliest of a series of coordinated attacks that claimed 130 lives across the metropolis. But Hughes has since proved controversial in his remarks.

Unlike many rockers, he is known for his right-wing politics and champions gun ownership as well as Republican presidential candidate Donald Trump.

In an interview published last week, Hughes called for greater scrutiny of Muslims in the West and alleged that conservative Christians were unfairly being blamed for global problems.

“I saw Muslims celebrating in the street during the attack. I saw it with my own eyes. In real time! How did they know what was going on? There must have been coordination,” he told Taki's Magazine, a publication of Greek-born conservative commentator Taki Theodoracopulos that has faced criticism for its writings on race.

Trump has voiced similar allegations of US Muslims celebrating the September 11th, 2001 attacks, claims for which there has been no documented evidence.

Hughes alleged that he personally saw suspected Paris attacks planner Salah Abdeslam at the Bataclan club and that he had eyed up his friend to see if he was a threat.

“I just chalked it up to Arab envy. You know what I mean? When a Muslim sees a cocky American dude with tattoos, he stares at him,” he said.

Hughes also alleged that a security guard inquired on the background of the singer's girlfriend, who is of Mexican origin, with an eye to warning her of the impending attack if she was Muslim.

Hughes in March also gave an interview in which he alleged an inside job. The Bataclan strongly disputed his assertions, saying the club's security likely saved hundreds of lives. The singer apologized for the remarks in March, saying that his allegations were “absurd” and the result of trauma.