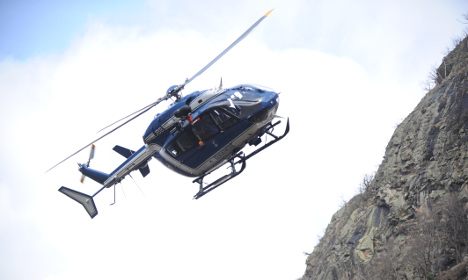 The police helicopter came down in the Hautes-Pyrénées in south western France.

The local prefecture confirmed that all four officers on board – the pilot, a mechanic, and two rescue specialists – had been killed.

The helicopter was participating in a mountain rescue training course, according to France 3. It took off from the airport in Laloubère (yellow star on map below) and came down at nearby Cauterets.

Interior Minister Bernard Cazeneuve will meet with the deceased officers' colleagues this evening, he announced.

It remains unknown what caused the accident at this point, but the Europe1 channel reported that the chopper hit a cliff face.

The crash occurred during an emergency landing attempt after the helicopter's equipment failed, according to the Depeche du Midi newspaper.

Two helicopters were at the site of the crash searching for the bodies of the victims and debris. The area is difficult to access due to its high altitude

The Gendarmerie Nationale has since updated their Facebook profile picture with a black band as a symbol of mourning.

Later on, the Gendarmerie Nationale tweeted the news and expressed its “strong emotion”.

Other public figures who expressed their condolences after the sad news included French PM Manuel Valls and the mayor of Nice, Christian Estrosi.

The last helicopter crash in the region took place in 2006, and killed three.