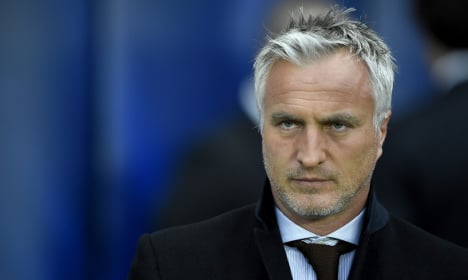 Photos: AFP
The professor who carried out the quadruple heart bypass told the AFP news agency that Ginola was “awake and improving” after his heart attack, which reportedly left him in a coma.
Ginola had been playing golf with other personalties at Mandelieu before he fell ill and was taken to Monaco's Princess Grace Hospital, where his condition was initially described as “unconscious but stable”.
The news prompted an outpouring of support on social media, with a post on Newcastle's official Twitter account reading “Get well soon”.
After leaving France for England in 1995 and spending two years in the northeast, Ginola played at Tottenham for three seasons where he was voted PFA Player of the Year and Footballer of the Year in 1999.
He then turned out for Aston Villa and Everton briefly before retiring in 2002.
He also played 17 times for his country between 1990 and 1995, but his international career was overshadowed by a 2-1 defeat to Bulgaria which saw France fail to reach the 1994 World Cup, with Ginola singled out for criticism by then coach Gerard Houllier.
Since his playing days, Ginola has turned his hand to presenting and working as a television pundit in both England and his native France.