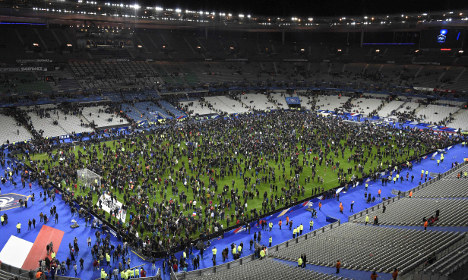 Spectators gather on the pitch of the Stade de France on November 13th, 2015, after a series of gun attacks occurred across Paris. Photo: AFP
DGSI agency chief Patrick Calvar made the comments at a hearing before a parliamentary committee on national defence on May 10th, an account of which was made public on Wednesday.
“We know that Daesh (Arabic acronym for Isis) is planning new attacks — using fighters in the area, taking routes which facilitate access to our territory — and that France is clearly targeted,” Calvar said.
He noted that Isis has suffered military setbacks in Syria and Iraq and wants to take revenge for the strikes by members of the anti-Isis coalition, of which France is a member.
Calvar noted that while last November's attacks in Paris that killed 130 people were conducted by suicide bombers and jihadists armed with Kalashnikovs, a new form of attack was possible.
“We risk being confronted with a new form of attack: a terrorist campaign characterized by leaving explosive devices in places where big crowds gather, multiplying this type of action to create a climate of panic,” he said, less than a month before the start of the Euro 2016 international football tournament in France.
He viewed France as “the country most threatened” by Isis as well as Al-Qaeda which he said wants to “restore its image” and its regional offshoots in the Maghreb and the Arabian peninsula.