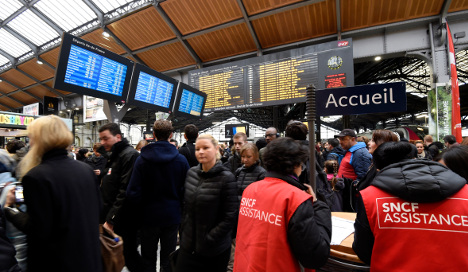 The SNCF, France's national railway company, advised travellers to cancel or rearrange any train journeys planned for Wednesday or Thursday if possible, due to disruptions from the strike.

The rail strike, called by two of its workers' four unions (CGT et Sud Rail) will last from Wednesday until 8am on Friday morning.
Rail workers are not only striking in protest of the labour laws, but also over long-running industry negotiations.
Workers said last week that they planned to hold rolling strikes every Wednesday and Thursday from this week onward, right up until the Euro 2016 championships in July.
And the effects looks pretty grim for rail travellers.

The TGV Atlantique, Sud Ouest and Nord lines will be particularly hard hit, with just half of the normal service running, while the eastern line should be unaffected by strikes.

Twenty percent of Ouigo trains are not running, and 60 percent of Intercité trains are cancelled during the day, with none at all running at night.

In the Ile-de-France area, the Transilien P will have a third of its trains running, while L, R, J and U will have just 50 percent of their trains.
The RER will be affected too, particularly line E which will have just one in two trains in service. Two of every three scheduled trains will be running on lines A, C and D, while the RER B will be almost at full service with four out of five trains running.
Most international lines including the Eurostar and Thalys should be running as normal, but only 40 percent of Elipsos trains, towards Spain, will be in service.
Numerous other strikes are also taking place this week, affecting France's airports, roads and schools, with Thursday set to be another difficult day for travel – find out more here.
You can follow the SNCF's service updates on their website.
READ ALSO: Why there's another rail strike in France and more to come

READ ALSO: Why there's another rail strike in France and more to come