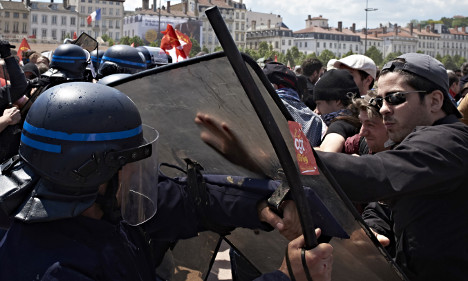 Photo: AFP
Police unions called on off-duty officers to gather in some 60 locations across France on Wednesday, including the Place de la Republique in Paris.
The move comes after a total of 350 officers have been injured by labour reform bill protesters, who have been out in force in recent months and whose demonstrations have often included violence.
President Francois Hollande said on Tuesday that more than 1,000 people had already been arrested in the protests, which on Tuesday swelled to crowds of 68,000 nationwide, according to authorities, while organizers estimated the turnout at 220,000.
Despite the clashes, 82 percent of the French have a positive opinion of the police, according to an Odoxa survey.
The president of the company behind the survey said the results showed that “the exceptional image of the police remained intact”, despite the increase in clashes at protests across the country.
Philippe Lavenu, from leading police union Alliance, said that officers were fed up with the “anti-cop hatred”, which shows a marked difference from when crowds would cheer the police after the January terror attacks last year.
“We have gone from being embraced by the crowds after the Charlie Hebdo killings to being attacked repeatedly in the streets,” he told The Local earlier this month.
READ ALSO: Why does 'everyone in France hate the police'? “We are exhausted. We are sick of this and that’s why we are calling on officers to protest,” added Lavenu. “We don’t deserve it. We had an incredibly tough year in 2015 with the two terror attacks. Officers have been working on their days off and without holidays and they are worn out.”
Police have faced criticism, however, after videos surfaced showing officers using what many consider to be excessive force against protesters.
The videos below have hardly eased tensions, showing members of the specialist CRS police, who deal with public disorder, punching a young high school student in the head and kicking a woman in the stomach.