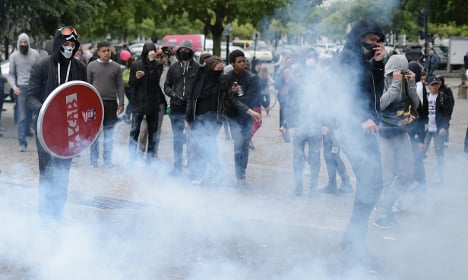 Labour unions and students had organized marches across France to demand the withdrawal of Hollande's controversial labour reforms.

The violent clashes were particularly bad in Nantes, western France, where several broke out around midday when hundreds of young people began throwing objects including glass bottles at police officers.

Unions said up to 10,000 people attended the protests in Nantes, and 3,500 according to police reports.

The march began at 11am, with young protesters holding banners reading “we aren't violent, we are angry” and “withdraw the labour reforms”, but was disrupted by masked radicals.

READ ALSO: Who are the masked rioters causing havoc in France? A group of seven or eight photographers and video-journalists who were covering the protests were also targeted, according to BFMTV, which reported that a photographer from local newspaper Ouest-France was injured by a wine bottle which hit the side of his face, although he was wearing a helmet and only sustained mild injuries. Another group set fire to a scooter close to the Place Bouffay – which has been the meeting point for the Nuits debout protests in Nantes – and garbage was thrown onto the fire. Security forces responded with tear gas.

TV channel TF1 described the clashes as “customary” as the city entered its 15th day of protests, adding that several local shops had not bothered to replace their windows after they had been damaged by trouble-makers. Paris also saw clashes between police and protesters, with some of the marchers among the thousands-strong crowd throwing bottles and firecrackers at police.

Eight people were banned from participating in future protests in Nantes and nine in Paris, due to violence in today's protests or previous ones. The bans will last until the end of the national state of emergency.

READ ALSO: Why does 'everyone in France hate the police'?

There were further incidents in Bordeaux, as trouble-makers infiltrated the protesters (who numbered 1,600 according to police and 4,500 according to unions).

They shouted provocative slogans such as “unions, bitches of the state”, local daily Sud-Ouest reported, and police had to break up clashes among the marchers. Two individuals were detained and the protest march was allowed to continue.