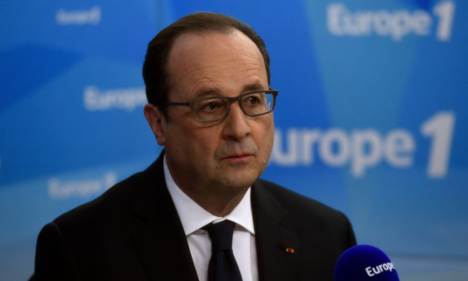 Photo: AFP
“I will not give way because too many (previous) governments have backed down,” the president said in an hour-long interview with Europe 1 radio.
France is facing a week of strikes in protest at a reform the government says will make the notoriously rigid labour market more flexible but which opponents say will erode job security.
Hollande said he defended the right of people to protest, but insisted the reforms were necessary.
“I prefer that people remember me as a president who made reforms rather than a president who did nothing,” he said.
Hollande also promised tougher action against troublemakers who infiltrate street protests against the labour market reforms and fight with riot police.
“It will not be accepted,” Hollande said, promising more arrests and bans on protesting for others.
“I respect those who are sincere and want to make their voices heard. But the people who aren't there to contest a law, but to damage things and to break into shops – that's enough, and it will not go unanswered. Protesting is a right, breaking things is a crime, and it will not go unpunished.”
He said more than 1,000 people had already been arrested and that 350 police officers had been injured in the violence.
The Socialist government last week survived the vote of no-confidence, which was called by the centre-right opposition after it forced through the labour market reform bill without parliament's approval.
The draft law will now be debated in the Senate, the upper house of parliament.
A defiant Hollande said the law “is going to go through because it has been debated, agreed on and amended”.
Many unions and student groups say the reform will do little to address France's jobless rate, which has been stuck at 10 percent overall, and nearly 25 percent for young people.
With less than a year to go until the presidential election, Hollande defended his assertion a month ago that France was “doing better”.
“When I came up with this turn of phrase, I did not mean that everything is getting better,” he said.
“But things are effectively getting better for France. It's not a campaign slogan, it's the reality.”
Hollande, who has some of the lowest poll ratings of any post-war French president, has said he will decide by the end of the year whether to stand for re-election next May.