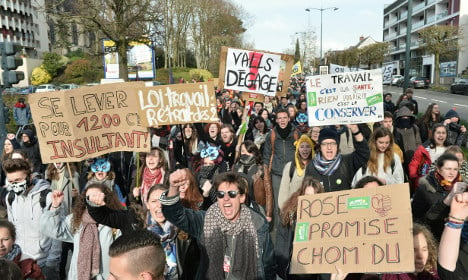 Even though the new labour reforms were forced through last week without parliament's approval, the protesters are not giving up, and unions have called for more strikes and protests on Tuesday and Thursday.

Transport including France's ports, trains, and airports will be affected by the general strikes.

The RATP, the company which organizes Paris's public transport, is currently reporting a normal service on all of the RATP and SNCF lines on its website, although two Metro stations – Ecole Militaire and Varenne – are closed due to public demonstrations.

However, the SNCF has advised travellers to cancel or rearrange any train journeys planned for Wednesday or Thursday if possible, due to disruptions from the strike.

Read more about Wednesday's cancellations here.
The rail strike, called by two of its workers' four unions (CGT et Sud Rail) will last from Wednesday until 8am on Friday morning, with a limited service running during that time. On the Marseille-Nice line, for example, just one out of eight scheduled trains will be running.
Rail workers are not only striking in protest of the labour laws, but also over long-running industry negotiations.
Workers said last week that planned to hold rolling strikes every Wednesday and Thursday from this week onward, right up until the Euro 2016 championships in July.
You can follow the SNCF's service updates on their website.
Buses will also be affected, including school buses, with no buses at all running in Antibes between 10am and 3pm on Tuesday. There will also be severe disruptions to bus services in Nice and Grasse. In Paris, several bus routes will be diverted during the afternoon of Tuesday, due to the planned protest marches.
On Tuesday, two out of every three TGV trains will be running on average, two of every five Intercite trains, and one in two TER trains. However, international lines including the Eurostar should be running as normal.
In Paris, the RER will be affected on Tuesday too, particularly line E which will have just one in three trains in service. Two of every three scheduled trains will be running on lines A, C and D, while the RER B will be almost at full service with four out of five trains running.
Air travel

Both of Paris's airports – Orly and CDG – will be disrupted from Tuesday onwards, due to a strike by technicians, engineers and air traffic controllers called by the DGAC. Anyone planning to fly into or out of Paris this week should contact their airline beforehand to see if their flight is affected.

A 24-hour strike has been called for Tuesday by the CGT union, which could be extended further, and a separate union has called a 24-hour strike starting at 11am on Thursday, reported Le Monde. 20 percent of flights were cancelled at Orly Airport during the last strike, however the full impact the strike will have on Paris's airports is not yet known.

Early on Tuesday morning, truck drivers caused blockages around several roads, mainly in the north of the country, however by rush hour the majority of blockages had been cleared.

However, further road blocks are possible on Tuesday, particularly in Nantes, Caen, Marseille, Bordeaux and the north, but not in the Ile-de-France region.

Two 24-hour strikes have been called by port and dock workers' unions on Tuesday and Thursday, so disruptions to ferry routes are likely.

Some schools will also be closed during the week due to striking teachers and other staff.

Certain municipalities including Nantes, Pau, Quimper and Vitrolles have updated their websites with a list of affected schools, but otherwise parents are advised to check with their child's school.

Seven unions (the CGT, FO, FSU, UNEF, UNL, FIDL, and union syndical Solidaires), which cover a range of workers and students, have called for strikes and protests on Tuesday and Thursday. These will be the sixth and seventh strike days related to France's controversial Labour Law in just over two months.

In Paris, a march will leave from the Place de l'École-Militaire in the 7th arrondissement at 2pm on Tuesday and head towards Sèvres-Babylone, close to the Senate.

On Thursday, another march is planned from the Place de la Nation to Place d'Italie.

We will be updating this story with the latest news on the strikes.