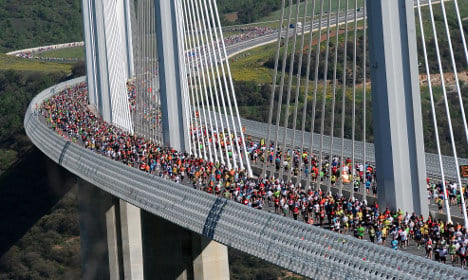 Part of the day will see runners cross the Millau viaduct in southern France. Photo: AFP

Encouraging families to spend a summer's afternoon hanging out at a motorway is a hard sell. While several of our readers have said they find France's autoroutes a pleasure to drive on, would you really voluntarily spend your entire Sunday there?

Well, that's exactly what France's highways association is aiming for with its first ever 'Motorway Party'.

On Sunday, May 22nd,  large sections of motorways up and down the country – 50km in total – will be closed to cars and transformed into cultural spaces with a multitude of activities on offer, ranging from BMX shows to circus performers to hot air balloon rides.

“Join us on your bike, roller skates, in a pram, on foot or on horseback… just not in a car!” urged Pierre Coppey, president of the French Association for Autoroute Businesses (ASFA) which has organized the event.

Coppey clearly hopes to share his passion for France's motorways with the public, and promised an “unforgettable experience”.

Here's a look at what's going to be happening.

In the north, the A4 in Reims will host cycle tours, a concert and a zumba class, while over in Melun the 'motorway fun park' will have obstacle courses and Segways and hoverboards to try out.

And on the A86 in Rueil-Mailmaison, there will be 10km races through the tunnel from 9:30am, followed by trampolining, beginners’ classes in zumba and yoga, and the opportunity to join in a big street art project for the tunnel.

If you're in western France, you can head to the A56 in Tours, where there will be a climbing wall, BMX shows, hot air balloon rides and a circus. The south of France is getting into the party spirit with a street party and funfair in the Prado Sud tunnel in Marseille, while the Tunnel de la Borne Romaine in Nice will host a circus, featuring stilt-walkers, trapeze artists, unicyclists, jugglers and dancers, plus a music concert outside the tunnel.

In Lyon, the A466 has giant board games, a bouncy castle and a giant mural, and to the west of the city on the A89, an 'art and food' festival will be taking place.

And there are plenty of opportunities for serious athletes too. There will be a basketball tournament on the A63 in southwestern France, a 27.5km race across the Millau viaduct in southern France, and a triathlon on the A51 close to Grenoble.

The Motorway Festival website has an interactive map with more information on the events, including how to reach the different sites.

The one-day festival will allow everyone to profit from the motorways, organizers said.

However, the event has provoked mixed reactions. On the ASFA's Facebook page Paris resident Nada Habibi commented “Quelle horreur” while others complained that the slogan “L'autoroute est à vous” (the motorway is yours) contrasted with the fact that several of the events require a fee.

The Fete de l'Autoroute is the first event of its kind, although Paris has experimented with car-free days for environmental reasons, with mayor Anne Hidalgo announcing that the Champs-Elysees will be pedestrianized for one Sunday each month, a scheme which began on May 8th.

Sunday's events will take place from around 9:30am until 5:30pm, with diversions and alternative routes put in place for road traffic.