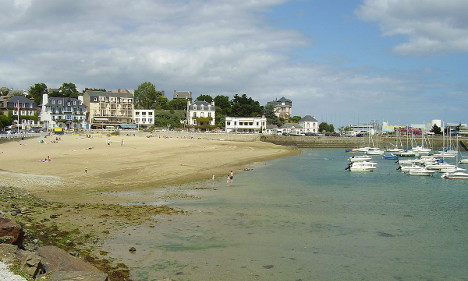 The arrests occurred in Saint-Quay-Portrieux in Brittany. Photo: Kamel15/WikiCommons
Two skippers and three suspected smugglers were detained on Friday after police discovered the migrants on their sailboat in Brittany on France's northwest coast.
“This migration network used a relatively rare and costly method, because the journey cost around 6,000 to 7,000 euros ($6,800 to $7,900),” said Julien Gentile, head of France's anti-smuggling office.
Police said the smugglers had rented at least 20 boats from different ports along the French coast over the past two years.
Initial investigations began in mid-2014 after British customs officials found six Ukrainians trying to come ashore from a yacht off the eastern coast of England.
A yacht thought to belong to the smuggling network was identified earlier this year and monitored as it passed through Italian, Spanish and British waters, before it ended up in Saint-Quay-Portrieux in Brittany where Friday's arrests occurred.
The Ukrainian migrants were set free with orders to leave France. They had travelled there using tourist visas.