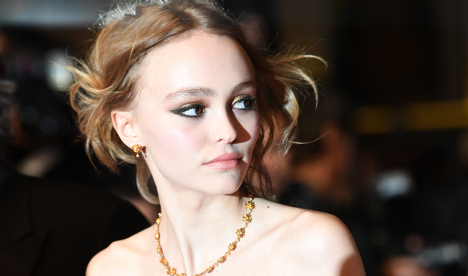 The striking teenager — who bears a remarkable resemblance to her mother — walked the red carpet in a bohemian off-the-shoulder gown before the premiere of “La Danseuse” (The Dancer) which is in the sidebar “Un Certain Regard” section of the Cannes film festival.

The movie tells the story of famous Belle Epoque dancer Loie Fuller — played by French actress Soko — who later fell into obscurity, and her complex relationship with protegee and rival Duncan.

“After meeting Isadora, who she secretly falls in love with, Loie Fuller could no longer dance. To her Isadora is the embodiment of beauty, grace, youth and genius, everything that she could never be,” director Stephanie Di Gusto told AFP.

The director described Depp as “exceptionally gifted” and a born star, and while the film received warm applause from critics, some panned her performance.

Entertainment website The Wrap described the film as “a pretty good movie with a number of sequences so breathtaking they will knock your socks off” and praised Soko's performance.

But for Depp they criticised a “wooden and lifeless performance” summing up with: “She is fine, I guess”

The Hollywood Reporter said Depp added “decorative value, if not a whole lot in terms of acting ability.”

With her winning genes Depp has already carved out a career as a model, becoming the teenage face of Chanel, and made her cinema debut in the film “Tusk” alongside her father in 2014.

She will also soon appear in the film “Planetarium” alongside Natalie Portman, about sisters who can communicate with ghosts.