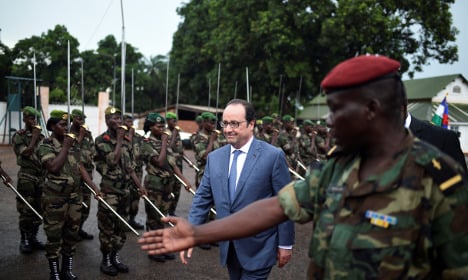 Hollande sees France as a natural liaison between its former colonies and English-speaking Nigeria. Photo: AFP

“The results (of the counter-insurgency) are impressive” and the rebels had been “diminished and forced to retreat”, he told a news conference in Abuja.

But added: “This terrorist group nevertheless remains a threat.”

Hollande was speaking after talks with his Nigerian counterpart Muhammadu Buhari at the presidential villa in the Nigerian capital before regional leaders met to discuss the conflict.

Discussions at the security summit are expected to focus on the formal deployment of a new regional force comprising troops from Nigeria and its neighbours Benin, Cameroon, Chad and Niger.

Over the last 15 months, individual armies have largely been acting independently to curb the violence in the face of mounting cross-border attacks, particularly suicide bombings.

The UN Security Council has also raised concerns about Boko Haram’s links to the Islamic State group, after reports of Nigerian fighters in lawless Libya.

Hollande, who sees France as a natural liaison between its former colonies and English-speaking Nigeria, said results had been achieved through better regional coordination.

Paris had also provided training and equipment, he added, as part of the international support to Abuja that includes British military trainers and US surveillance drones.

Hollande and Buhari signed a “letter of intent” to pave the way for a defence agreement.