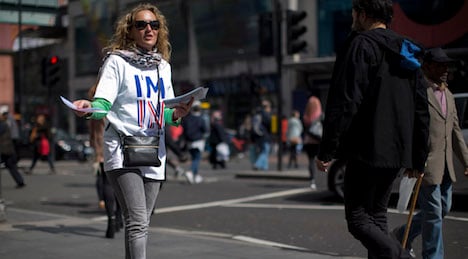 A pro-EU campaigner hands out leaflets in London. Photo: Justin Tallis/AFP
Councils in the UK have form on messing up when it comes to expat voter registration.
I have personally heard stories of Brits abroad who received their postal ballots weeks after last year’s British General Election because the relevant council not only sent the papers out just four days before the election but also marked overseas post with second class UK stamps. I have also heard how authorised proxies were denied the right to vote on behalf of overseas friends or relatives because the polling station had no record of the request being made. Other Brits living in Portugal and wishing to vote in the forthcoming EU Referendum have had no acknowledgment that their registration request has even been received.
Meanwhile, the 16th May  ‘deadline’ for expats to register to vote in the Referendum is looming.
This is not about whether you think it’s right that Brits abroad should retain voting rights in the UK. That argument is still being thrashed out as I type. And not all councils are inefficient about registration: many do a very good job with few resources.  Rather, this is about making the current system work, at least for those who are still eligible.
So what’s to be done? Quite simply, if you want to vote in the EU Referendum you should check in with your local council straight away (and certainly before the 16th May deadline).  If you haven’t registered to vote (and have been registered in the UK within the past 15 years), you should do so now, ideally by proxy or postal vote (although these are far less reliable).  If you’ve picked the postal vote option, you should also ask when the papers will be sent out and keep in touch to make sure you receive them in good time.
Crucially, the Electoral Commission says Brits abroad don't need to re-register every year, but they do need to declare with their local authority that they are still eligible to vote. This means that all Brits abroad who want to vote on 23rd June should contact their local authority to check if they are still considered eligible by them. Each local authority has different rules for making a declaration. Some accept a phone call, others require letters, formal proof etc. In practical terms this means if a local authority has not proactively sought to check, you will likely not be able to vote, until you resubmit a declaration.
Unlike other elections, in the case of the EU Referendum, every vote really does count. The polls show those wishing Britain to 'Remain' and those wanting us to 'Leave' are level-pegging again. So Brits abroad who want to vote need to make sure that we keep the pressure up to exercise our democratic rights.
We can’t take anything for granted. Particularly, not the post.
Laura Shields is Campaign Spokesperson for Brits Abroad: Yes to Europe, a non-partisan 'get out the vote' initiative managed by the Brussels and Europe Liberal Democrats. The campaign has a Facebook page with up-to-date news about the debate. More information on the Brussels and Europe Lib Dems referendum campaign and practical advice about voting can be found by clicking here.