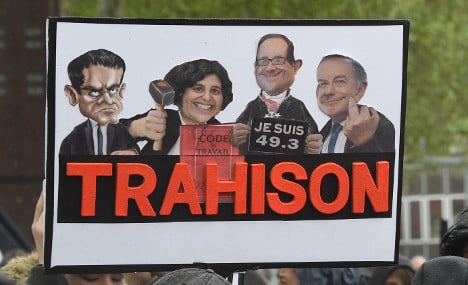 Both workers and company chiefs view the government as failing them. Photo: AFP

There's really nothing much left of the original labour reforms bill (after the French government watered it down in the face of opposition). What exactly? (CLICK HERE to find out more)

Companies in France which are facing a very volatile, bleak and uncertain situation, demand more flexibility, which is understandable.

The reforms that are left will probably help them weather the storm but they are not going to lead to significant job creation.

Employers only hire when they see their order books fill up. In such a difficult economic climate they are reluctant to take risks and prefer to hire temporary or freelance workers so the traditional permanent staff base disappears.

While it is perfectly legitimate for an employers’ association to represent the interests of companies it is the same for employees’ unions that protect workers rights. But let’s be realistic.

When it takes on average four years for any dispute to be resolved by an employment tribunal in France (the French government backed down from imposing limits on compensation payouts to sacked workers, to the anger of bosses), the rights of workers that are in theory being protected, are in reality not being looked after at all.

Because the balance of power is too unfavourable towards workers because of the current mass unemployment.

Only employees with rare skills that are specifically sought by companies get what they want.

While the search for a compromise between the two sides may appear to be the right option, in fact it is not.

To the misfortune of all of us the French state is incapable of understanding what is in the best interests of the general population.

France is a country where millions of people are neither employers or employees and their chances of becoming either are melting like snow in the sun.

There are almost 10 million people unemployed and over 16 percent of the population live below the poverty line, but who cares about their fate?

They are neither recognised nor represented by a trade union. And often they do not vote, which makes them the forgotten masses of the French Republic. This mass unemployment and impoverishment destroys growth and social structures and weighs heavy on the accounts of the state. So if the labour reforms have no significant impact on unemployment, then what are they for?

The creditors of the French state have good reason to be concerned because none of the reforms address their real concerns about France.

The labour reforms bill gives them the impression of a charade, with the government trying to show it has demonstrated great courage and unfailing strength, even though the bill has no real economic consistency.

The labour bill has taken a disproportionate role compared to the real issues that we too often forget.

International finance institutions do not care about the intricate and subtle paragraphs of the French labour code, fiercely negotiated by unions and bosses.

These institutions just care that the French growth is insufficient to prevent the rapant impoverishment of the population. This is not philanthropy, their only concern is the French state’s capacity to reimburse them.

Last week the European Commission noted that the trajectory followed by the French state is lower than that of its neighbouring countries and that its debt continues to increase while the debt of France’s neighbours decrease.

How will they view the regrettable epilogue of France’s labour bill. They now understand that French politicians take positions based on ideology and elections, as if the economic urgency did not exist.

They will see that France favours measures that have no impact on the economy.

They will see that the political class has not understood the economic urgency that all the indicators point to.

And ultimately their hopes of seeing France undertake real reforms have been truly dashed. This whole episode will reassure no one, not France’s European partners, nor its creditors, let along those who insure France’s debt.

Bertrand Chokrane was previously a strategic planned for Renault-Nissan and Dassault Systems but is now the head of his own financial analysis company.

The original version of this article was published in French in Le Figaro. To view it CLICK HERE.