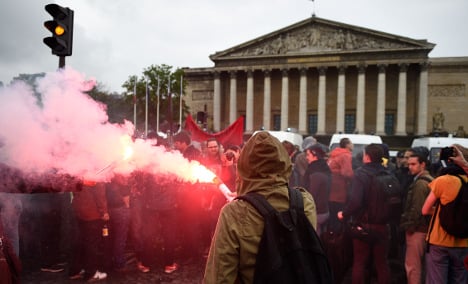 France's Socialist government is to face no-confidence vote on Thursday after it bypassed parliament and rammed through a labour reform bill that has sparked two months of massive street protests.

The team of embattled President Francois Hollande resorted to the controversial manoeuvre on Tuesday in the face of fierce opposition from within his own party that meant the bill would never get the green light in parliament.

But the move by the government has only served to fire up anger among opponents of the bill, which will make it easier for bosses to lay off workers.

There were tense scenes near the French parliament on Tuesday as protesters turned up in their thousands to protest what they saw as the government bypassing the democratic process. (Protesters face off with police in Paris on May 10th. AFP)

There were also protests in cities around the country with riot police clashing with protesters in the city of Nantes. Several unions also responded to the government’s measure by announcing two days of strikes and protests for May 17th and May 19th. (A day of protests in France against the labour reforms.)

The main CGT union, a firm opponent of the bill, as well as the unions Force Ouvriere, FSU, Solidaires and student unions Unef and UNL have called on members to join the strikes.

It is unclear what impact the industrial action will have, but previous strike action has affected both flights and train services in the country.

Two right-wing opposition parties filed a no-confidence motion to be debated in the 575-seat parliament on Thursday, and between them they have 226 of the 288 votes that would be needed to topple the government.

They have asked left-wing critics of the labour reform to back them –something the minister for parliamentary relations, Jean-Marie Le Guen, said was “inconceivable”.

Meanwhile the leader of around 30 dissenters among the ruling Socialists,Christian Paul, said he hoped to join forces with green MPs to muster the 58 deputies needed to introduce a separate no-confidence motion “of the left”.

The tactic to legislate by decree has been used only once before under Hollande — to force through another controversial economic reform governing trading hours and the deregulation of some sectors.

That also prompted a vote of no-confidence in the government which it duly survived, given that left wing rebel MPs, known as les frondeurs, were not prepared to vote against the government and precipitate new parliamentary elections.

It is likely Thursday's vote of no-confidence will also fail to topple the Socialist government.

The labour reforms, which makes it easier for employers to hire and fire workers,is likely the last major piece of legislation for Hollande, the least popular leader in modern French history who faces a re-election bid next year.

Not only has the labour reforms bill angered unions, who believe it favours companies and will fail to create jobs for young people, the reforms have also infuriated bosses groups after they were watered down by the Prime Minister.

Pressure from the street — as well as parliament's back benches – caused the government to water down the proposals, which only angered bosses while failing to assuage critics.

Bosses were notably unhappy with the withdrawal of a cap on the amount companies must pay for unfair dismissal, as well as the scrapping of a measure that would have allowed small- and medium-sized companies to unilaterally introduce flexible working hours.