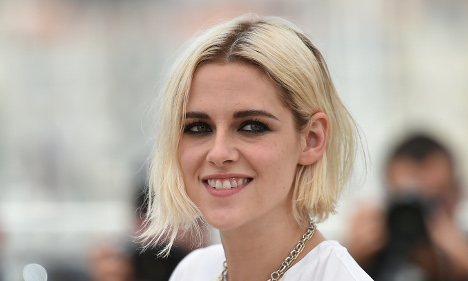 Kristen Steward in Cannes. All photos: AFP
The red carpet awaits some of Hollywood's biggest stars, such as Julia Roberts, Jodie Foster, Sean Penn, Robert De Niro, Charlize Theron and George Clooney, as the French Riviera town transforms into the film capital of the world for 12 heady and exhausting days.
The event has heaped pressure on French authorities already on high alert six months after terror attacks left 130 dead in Paris.
But 80-year-old Allen's opening film is a eulogy to supposedly less fearful times, a love story that flits between 1930s Hollywood and bohemian New York where gangsters, millionaires and ambitious women rubs shoulders to a trad jazz soundtrack.
Before his film premiered, the Hollywood veteran admitted that the terror threat was playing on his mind. “I'm hypochondriacal when it comes to terrorism,” Allen told Variety, “the world's biggest worrywart.”
Hundreds of extra police officers have been deployed, however, with daily bomb sweeps of the main venue — the Palais des Festivals — and long queues at checks to get inside.
But while rain is forecast to drench the opening, authorities have vowed security will not further dampen the jamboree that lures celebrities and film industry schmoozers to Cannes.
Festival director Thierry Fremaux told AFP that despite the terror threat which prompted the French interior minister to visit the town Monday, this would be a “normal year I dare to say”, and that it was important that Cannes “is there to defend (global) cinema”. Woody Allen.
Amazon in prime position
This year is one of the most star-studded in recent times, and “Twilight” megastar turned indie darling Stewart as well as Blake Lively and Steve Carell are among those appearing on the red carpet Wednesday for the “Cafe Society” premiere.
Allen also narrates the movie — his 46th — which he describes as “like reading a novel on my life” with the actor and writer Jesse Eisenberg, of “The Social Network” fame, playing the Allen character.
“If I was Jesse's age I would have played myself, but I wouldn't have played it as well,” Allen told reporters after a screening for the press.
The film is one of five backed by Amazon at Cannes, a sign of a shift in the cinema industry which is increasingly opening up to subscription services, although straight-to-streaming site Netflix is still being snubbed by Cannes.
Nearly 90 feature films from all over the world will be shown in this year's official selection.
These include 21 which are in the running for the Palme d'Or main prize, such as “The Last Face” by actor-director Penn featuring his ex-girlfriend Theron and the latest offering from French Canadian wonderkid Xavier Dolan of “Mommy” fame.
The first of the big Hollywood films, Foster's drama about a Wall Street tipster “Money Monster” starring Clooney and Roberts screens Thursday. Australian director and President of the Jury George Miller
Controversy
And Steven Spielberg will roll out his blockbuster version of Roald Dahl's “The BFG” at the weekend, although neither are competing for the main Palme d'Or prize.
But already some of the main competition films are raising eyebrows, with Juliette Binoche starring in a period horror “Slack Bay” about Victorian tourists eaten by the locals in northern France.
Another, “The Neon Demon”, also features cannibalism, this time among supermodels in Los Angeles according to the film's Danish director Nicolas Winding Refn, who is notorious for depicting extreme violence.
Hundreds more movies are showing in the film market and in the Director's Fortnight and Critics' Week sections.
The population of Cannes nearly triples to some 200,000 people as film producers, industry workers and actors pour in to do deals, network and party.
By Fran Blandy