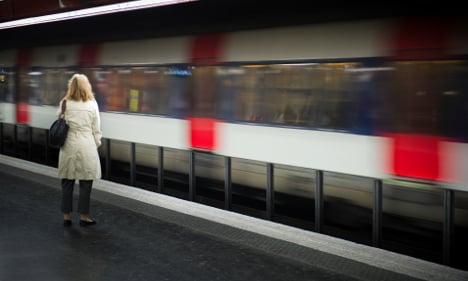 File photo: AFP
The teenager used the Periscope app to share the horrific final moments of her life with around 1,000 viewers on Tuesday afternoon, reported France Info.
Her suicide was preceded by a number of posts in which she promised an upcoming live stream of importance.
The unnamed French woman “sent a text to one of her friends several minutes before her death to make them aware of her intentions,” said prosecutor Eric Lallement.
“She also made statements to Internet users via the Periscope application to explain her act.”
In her final video she said that she was a victim of rape and then named the aggressor, reported Le Point newspaper.
A judicial source told the AFP news agency that the claims were being treated with caution at this stage.
“What's about to happen will be very shocking, but I'm not doing it for the hype, I am doing it to send a message,” she said, reported Metro news.
The woman then jumped in front of an oncoming RER C train at the Egly station in the northern suburbs of Paris.
The footage of the actual death was removed by Periscope but some of the video leading up to the suicide was still available on YouTube.
The AFP reported that the final video cuts to a black screen, and what appear to be the voices of emergency personnel can be faintly heard. Many messages of concern from Periscope users are seen flashing up on the screen.
Police said they were informed by someone watching the Periscope stream.
“We were alerted around 4:30pm by a Periscope user who was connected with the victim and told us that she was not well,” a police source said.
France Info reported that the woman's death had also been captured on CCTV footage from the station.
Emergency crews pronounced the woman dead at the scene. Police, who seized the woman's phone found at the scene, have since launched an investigation.
Twitter, which bought Periscope in 2015, said it did not comment on individual accounts.
Periscope is an app that was launched last year that specializes in live video streaming. It has over 10 million users, and the company says that over 40 years' worth of footage is viewed each day.
The app has proven to be one of the social media tools of choice in France recently, as protesters across the country have used it to film clashes with police in the massive demonstrations of the past few months.
The app was also used to film Paris footballer Serge Aurier calling his coach a “faggot” who “sucks off” fellow footballer Zlatan Ibrahimovic. Aurier was suspended soon after.