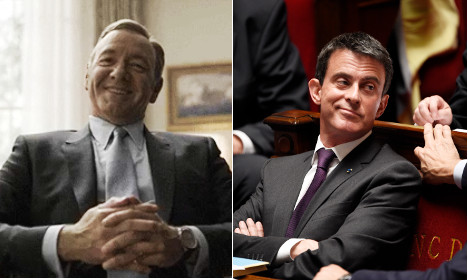 Photos: HouseOfCards/Twitter and AFP
The corrupt and fictional president Frank Underwood, star of Netflix smash hit House of Cards, set his sights on French Prime Minister Manuel Valls on Wednesday.
Underwood tweeted “Democracy is so overrated” to the PM, with an attached gif of Underwood, who is played by Kevin Spacey, laughing while apparently sitting in the Oval Office of the White House.
The message came with the hashtags #LoiTravail and #49al3 in reference to the French government forcing its unpopular labour reforms bill through parliament this week without a vote.
The move was hugely controversial, prompting tense scenes near the French parliament on Tuesday as protesters turned up in their thousands to protest what they saw as the government bypassing the democratic process.
This followed months of protests of the labour reform bill, that saw often violent demonstrations across France and many clashes between protesters and police.
Valls didn't let the tweet go unanswered, however, and later responded (in English):
“Dear Frank, Democracy is the worst form of Government, except for all others 😉 Never forget!”
He added a picture of former UK prime minister Winston Churchill, who coined the phrase.
See the exchange below.

.@HouseOfCards Dear Frank, Democracy is the worst form of Government, except for all others 😉 Never forget! pic.twitter.com/d2pDA5dnsg

Frank Underwood – or more accurately, the communications team behind his Twitter account – made headlines in April after an exchange with British Prime Minister David Cameron.
After Cameron got tied up in his involvement in offshore funds, Underwood sent an unimpressed glance of a gif in response to a 2015 tweet from the PM saying that people who had done the right thing – worked, saved and paid your taxes – should be rewarded, not punished.