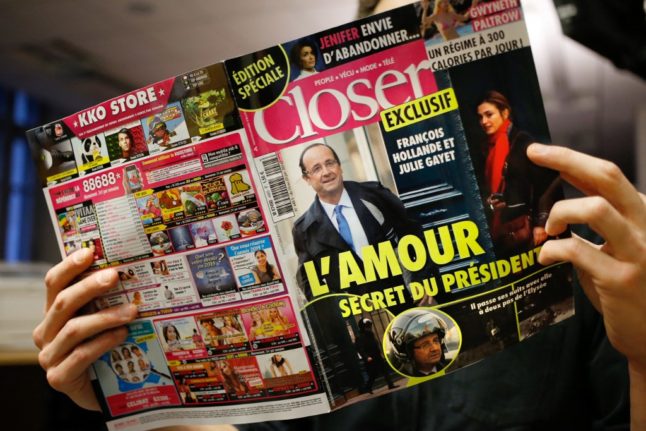 The exact circumstances around the death of president Félix Faure in 1899 are still uncertain, apart from the fact he died in the arms of his half-naked mistress Marguerite Steinheil in the drawing room.

Faure was later found to have died of a brain haemorrhage, although some suggested he was the victim of poisoning by his political opponents.

But within hours France was awash with rumours of the president dying in the arms of his mistress and as the website RFI reports, the left wing French press had a bit of fun at his expense.

“Félix Faure passed away in good health, indeed from the excess of good health,” wrote the French daily Gil Blas in February 1899.

The Journal du Peuple wrote: “He was sacrificed on Venus’s altar, at the limits of that official morality of which he was supposed to be the highest representative.”

For her part, Faure’s mistress Steinheil ended up being nicknamed la pompe funèbre (the funeral director).

The case of the “Pink ballet” is one of the most controversial sex scandals involving a French politician.

In 1959, a daily newspaper revealed that the Assemblée nationale president André Le Toquer was holding sex parties in his official residence outside of Paris.

The one-armed 73-year-old was convicted of “offences against morality” in a scandal that involved major French businessmen and even a Romanian countess.

But the World War I veteran and member of the French resistance, who fought alongside General de Gaulle, was considered to have served his country well and was handed a one-year suspended jail sentence and a 3,000 franc fine.

Even at the time, many considered that extremely lenient.

The president’s wife and the celebrity sex parties

This affair began in 1968 when a man called Stevan Markovic was found dead in his car in the greater Paris area. Markovic worked as a body guard to the French film star Alain Delon, and among the things found in his car were sexually explicit photos of a woman who strongly resembled Claude Pompidou – wife of French Prime Minister (and later president) Georges Pompidou.

These are the only undisputed facts about the case, which is still hotly contested today.

Delon and Markovic were known to enjoy sex parties, which were sometimes filmed and photographed, and the allegation is that Madame Pompidou was a guest at one (or more) of these parties. Pompidou said the photos were of a prostitute who merely resembled his wife, although he did admit that he and his wife had attended parties with Delon and Markovic.

Pompidou was elected president the following year and no-one was ever charged with Markovic’s murder.

François Mitterrand and his secret daughter

The news caused a scandal not only because Mitterrand was married at the time, but mainly because the state helped him keep it hidden from press, even as Mitterand paid regular visits to his mistress and daughter.

Mitterrand’s desperation to keep it a secret from the French press was one of the motivations behind some of the illegal wiretapping that he ordered under the guise of fighting terrorism.

At his funeral in 1996, both Ms Pingeot and Mazarine attended alongside Mr Mitterrand’s wife, Danielle, and their two sons.

Mazerine later wrote a book in which she revealed what it had been like growing up knowing that she was the ‘guilty secret’ of the president.

The serial killer and the prostitutes

Various French public officials were alleged to have protected him and Alegre claimed the city’s senior officials ordered some of the murders in a bid to protect themselves from blackmail.

Hollande, the actress and the spurned lover

Not many would have imagined the president nicknamed “flamby” would have ended up embroiled in a sex scandal that made global news.

But that’s exactly what happened in January 2014, when Closer magazine revealed that François Hollande had been having a secret affair behind the back of his partner Valerie Trierweiler with actress Julie Gayet.

The publication of images showing Hollande heading off to meet Gayet on the back of a scooter effectively brought to an abrupt end the longstanding notion that the president’s private life was off limits for the media.

Despite Hollande batting away questions about his love life the scandal was not quickly forgotten with Trierweiler releasing a tell-all memoir sarcastically titled “Thank You for this moment”.

In 2022, five years after leaving office, Hollande and Gayet married.

DSK, the hotel maid and the prostitutes/libertines

IMF chief Dominique Strauss-Kahn – and at one time French presidential hopeful – has been involved in numerous sordid affairs.

DSK was also at the centre of the so-called Carlton affair.

He would attend sex parties – or Bunga Bunga get togethers as Sylvio Berlusconi called them – along with prostitutes.

DSK said he had no idea they were sex workers – arguing that once a woman was naked, how could you tell? – and tried to portray himself as a ‘libertine’ who enjoyed high-end sex parties.

This case did result in criminal charges, but he was cleared of any wrong doing in the high profile trial. If you really want to know how sordid the whole affair was, then read these most outrageous and explicit quotes from the trial.

In 2020 it was revealed that Benjamin Griveaux, a 42-year-old politician who was a close ally of Emmanuel Macron and at that moment was running for the job of mayor of Paris, had had an affair with a woman who was not his wife.

The scandal was revealed via an intimate video that Griveaux had sent the woman during the course of their affair and led to his resignation.

Although the scandal itself was not particularly remarkable – the film was made during the course of an affair between consenting adults and there is no suggestion that Griveaux coerced or pressured her into a relationship – the manner in which it was revealed is interesting.

The tape was released by his former lover and her new partner, Russian performance artist Piotr Pavlenski, previously best known for nailing his scrotum to Red Square.

Pavlenski had initially offered the compromising footage to French news site Mediapart, which declined to publish because of the “sacred principle of the absolute respect of private life.”

He instead published the footage on social media, which was widely shared and eventually picked up by traditional media – the final nail in the coffin, many said, of the idea that a French politician’s sex life was nothing to do with his job. Although a criminal case is ongoing against Pavlenski and the woman for publishing intimate images of a person without their consent, which is illegal in France.