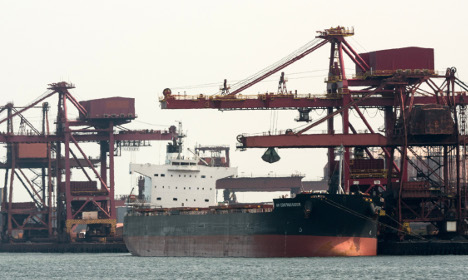 A cargo ship at the port of Dunkirk, where the imported shale gas is due to be arrive. Photo: AFP

A new row over shale gas (called gaz de schiste in French) has engulfed France after it was claimed in the French media that the first imports from the US would be arriving in the country as early as next month.

That claim, although denied by French energy giant EDF, was met with shock and anger by many environmental groups in France, who have accused state owned EDF of hypocrisy.

The topic of shale gas has long been a thorny issue in France given the damage to the environment caused by the much-maligned system of hydraulic fracturing or “fracking”.

The Socialist government has insisted it has no plans to exploit the country’s deep reserves, despite the pressure from energy groups, claiming it did not want to risk environmental damage.

However it appears the government is far more comfortable with the idea of damage to the environment in America given its willingness to import ship loads of shale gas from the US.

“Hydraulic fracturing is forbidden in France to avoid pollution but we’ll buy shale gas from elsewhere that will penalise local populations.”

“We don’t care about others. We won’t pollute our own garden but we’ll pollute someone else’s.”

Fracking, which involves drilling down deep into the earth before a high-pressure water mixture is directed at the rock to release the gas inside, was banned in France back in 2011. France’s ecology minister tried to dampen the row at the weekend, claiming that, she personally anyway, was against the importation of shale gas.

“We can’t ban shale gas on French territory for important environmental reasons and at the same time accept its importation,” the minister said.

However given her position and the state’s involvement in EDF, environmental groups believe she must have been aware of the plan to import shale gas from the United States.

The US is the world’s biggest exporter of shale gas with cargo ships already having been sent off to Brazil, Argentina, Portugal and Belgium.

Experts say given the globalised energy market, it would be hard for France to impose a ban on imports.

According to L’Express newspaper EDF has already signed contracts for the delivery of several cargo ships of natural liquid gas (LNG) which includes shale gas, over the next 20 years.

The row over whether France should exploit its vast shale gas resources kicked off once again in April last year when it emerged the government has buried a report that suggested alternative and safer methods to mine the gas other than the much-maligned “fracking”.

The report, that looked into greener alternatives to the system of fracking, was commissioned in 2013 by former industry minister Arnaud Montebourg – an outspoken advocate for clean mining of shale gas.