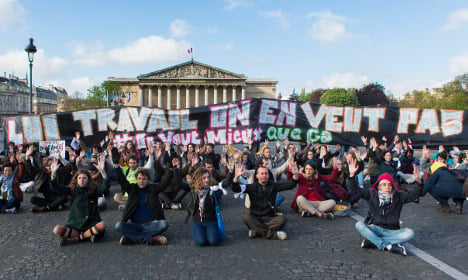 France's Socialist government sparked even more anger over its labour reforms bill after ministers forced the new laws through parliament without getting the usual green light from MPs.

The government held an extraordinary cabinet meeting on Tuesday to allow the presidency to bypass parliament to force through a highly contested labour reform, several ministers told AFP.

The ministers met at 2:30 pm (1230 GMT) to approve the Socialist government's recourse to a constitutional 49-3 article, that was also used controversially last year to push through a law that liberalised some economic activities, including the extension of Sunday trading hours.

“Pursuing the debate in parliament would pose the risk of… abandoning the compromise that we have built,” Prime Minister Manuel Valls told parliament.

He said the government wanted to avoid “a disheartening spectacle of division and political posturing because of an obstructionist minority”.

The government says the bill is designed to unlock France's rigid labour market and cut stubbornly high unemployment of around 10 percent — the issue that has dogged Socialist President Francois Hollande's four years in power.

But since March, hundreds of thousands of people in cities around France have demonstrated against what they see as a reform weighed in favour of bosses.

Unions fear the reform will erode the cherished rights of workers who are on full-time contracts, while student organisations — which have been at the forefront of the protests — believe it will fail to create secure jobs for young people.

In a passionate defence of the reform, the 38-year-old El Khomri said it was “necessary” and “fair”.

“I want this bill to help my country,” El Khomri said. “We can be proud of this bill.”

Hollande said the reform was a “dynamic and fair compromise”.

With 12 months to go until the presidential election, the bill is likely to be the last major piece of legislation introduced by the 61-year-old Hollande's government.

The reform that was to have been Hollande's signature achievement has instead brought supporters of his own Socialist Party onto the streets.

Several protests have descended into violence with 300 police officers being injured.

The opposition has forced the government to water down its original proposals, with the result that employers are now worried.

Pierre Gattaz, the head of the employers' federation Medef, said the reform “will fail to create jobs”.

“In its current state, the bill really scares us,” he told RTL radio.

“I would really like lawmakers to go back to the initial spirit of the bill.

“This labour market needs to be unlocked. The whole world says so, Brussels says so and all the international organisations say so,” he said.