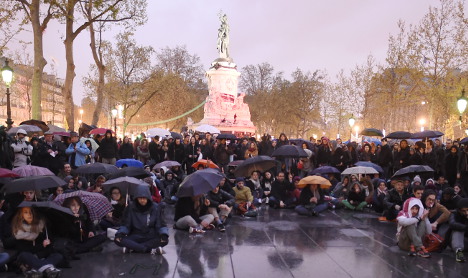 Researchers have studied the mass of people who descend on Place de Republique each night as part of the “Nuit Debout” protest movement.

The movement, the name of which roughly translates as “rise up at night”, began as part of the anti-labour movement protests, but quickly became an umbrella group for all sorts of campaigns from ecology to pro-Palestine.

Political analysts have struggled to define the nature and aim of a movement some have described as the face of France’s disenchanted youth, although others have noted that many seem to head to the iconic square for a drink rather than a debate.

But researchers have at least given us an idea of who the people are driving a movement that has called for worldwide protests against various causes later this month.

According to them, the archetypal Nuit Debout protester is a man, aged in his thirties and more qualified than your average Frenchman.

But it is also someone who has spent periods of time unemployed and significantly the typical Nuit Deboutist, as they are known in France, is from Paris. And they are more than likely a left wing voter.

The conclusions of the survey were made after hundreds of questionnaires were handed out at Place de la Republique each night last month.

Two thirds of the Nuit Debout followers are men, with 63 percent from the city of Paris (90 percent from Paris and surrounding suburbs) with a large proportion of those from the trendy and more working/middle class eastern arrondissements.

Among the references cited by those who responded to the questionnaires were Trotsky, Marx, Mother Theresa, Bob Marley and Gerard Depardieu.