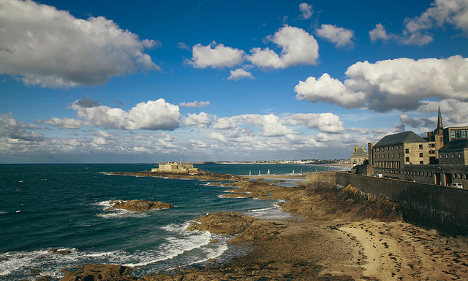 As temperatures rose over the weekend, many people seized the opportunity to head to the coast of Brittany and thousands descended on the small coastal town of Saint Malo.

But in their rush to get to the beach, several tourists apparently missed the numerous signs warning of high tides, and parked their cars precariously close to the coast. And unfortunately for them, Friday coincided with a 'supertide' – leaving four cars underwater.

Firefighters had to step in in the early evening to secure 12 cars in danger of drifting away.

One of the firefighters said that “among the cars was an Audi 5 – a very expensive car. Despite the 'no parking' signs, people park wherever they want,” speaking to local newspaper Le Telegramme.

On Saturday, municipal police patrolled the coast to enforce the parking laws and ensure that no cars ended up meeting a watery end.

A set of pictures of the submerged vehicles posted by a local resident has been shared almost 20,000 times on Facebook – and should serve as a warning to anyone heading to the beach again this weekend.