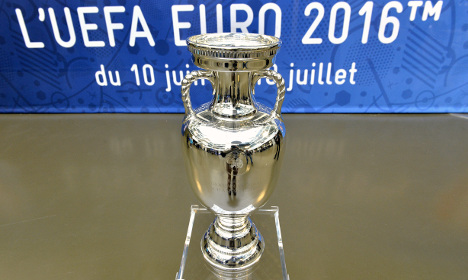 France is launching the final countdown to the European Championship finals where the star appeal of Cristiano Ronaldo and Zlatan Ibrahimovic risks being overshadowed by fears of a terrorist attack.

Troops and extra police have been patrolling the streets of Paris and other major cities since the November 13 attacks in the French capital that left 130 dead.

Chief organiser Jacques Lambert told AFP it was inevitable that Euro 2016 would be “a target” for militants but also insisted that it must be “a breath of fresh air” for a public weary of security threats.

France was chosen in 2010 to host the event, that for the first time will feature 24 teams including world champions Germany and Belgium, Spain, Portugal and England also from the top 10 in the FIFA world rankings.

The presence of Portugal's Ronaldo, Ibrahimovic with Sweden, Thomas Mueller with Germany, Wales' Gareth Bale and Andres Iniesta with Spain has helped sell all but about 20,000 tickets of the 2.5 million tickets for the 51 games.

The competition starts at the Stade de France in Paris on June 10 with a Group A game between the hosts and Romania. The final is in the same stadium on July 10 when the most expensive tickets cost 895 euros ($1,020)

But the razzmatazz has been dominated by security fears since the Charlie Hebdo attacks in Paris in January last year and new strikes in November which included a failed attempt to bomb the Stade de France.

Organisers will take over the 10 stadiums in Paris, Lens, Lille, Lyon, Marseille, Bordeaux, Nice, St Etienne and Toulouse from May 14 to carry out final technical and security work, according to Lambert.

Security costs for Euro 2016 have doubled from the 12 million euros ($13.7 million) first planned to 24 million. Some cities wanted to cancel plans for fan zones near the stadiums that would attract tens of thousands of fans.

The tournament was on a list of potential targets found in raids in Brussels after attacks by Islamist militants in March.

“From what we were told, the Euro appeared on a list along with the Eiffel Tower, the La Defense business district, the department stores, the RER commuter train network and I don't know what else,” Lambert told AFP in an interview.

“It does not change anything for us. You don't need to find the Euro name written on a piece of paper to know that, because of the event's notoriety it is clearly a target.

“Whatever happens in France during this month, it will be an attack on the Euro,” he said.

Lambert said he regretted the “extreme focus” on the security fears for the football extravaganza and insisted that it was not the only target.

“I understand that security questions are a priority but this event has also got to bring a breath of fresh air. This has to be a time when we talk about other things.

“We are putting as much energy into security as proposing a warm, fraternal festive welcome to spectactors,” he said.

A year ahead of the International Olympic Committee decision on who hosts the 2024 Olympics, some observers see Euro 2016 as having a crucial role in deciding the chances of Paris against Budapest, Los Angeles and Rome.

Lambert, who had key roles organising the 1992 Winter Olympics at Albertville and the 1998 World Cup in France acknowledged the risks.