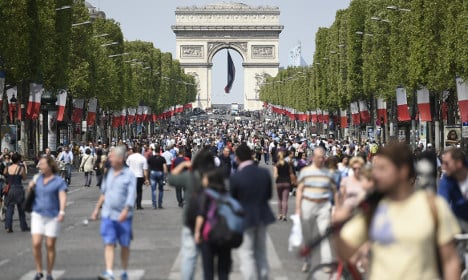 People walk along the Champs-Elysees Avenue in Paris, on Sunday, as French capital's most famous avenue goes car-free for a day, in the first instalment of a monthly effort to tackle pollution in

The first instalment of a monthly series of pedestrian-only days was hailed as a resounding success by Parisians and tourists alike on the two kilometre-long (1.2-mile) avenue leading to the Arc de Triomphe.

“Oh la la. Look at that, it's magnificent,” said Roger, 67, who lives just off the Champs-Elysees as he got his first look at the thousands of people strolling in the sun where normally cars and motorbikes would be thronging the road.

“All of Paris should be like this,” he said. “We have to stop poisoning people, we need to open up the city. There should be more public transport and more taxis, but we don't need cars in Paris.

“I just hope the city authorities are going to continue to make progress on this.”

Lined with French flags after a ceremony to mark the end of World War II in Europe 71 years ago, the avenue dubbed by the French as the “most beautiful in the world” was looking its best — and there were no cars to spoil the view.

Paris mayor Anne Hidalgo says the experience on the Champs-Elysees will be repeated on the first Sunday of every month, partly to “bring Parisians back to this emblematic place which belongs to them” and partly to reduce pollution.

Nine new routes will also be reserved for pedestrians and bicycles every Sunday and public holiday — adding to the 13 already subject to traffic restrictions under the “Paris Respire” (Paris Breathes) anti-pollution
programme.

When a large part of central Paris was closed to cars in September last year, air quality experts said nitrogen oxide emissions dropped by between 20 and 40 percent.

“I think this is such a good idea, you can really feel the city more,” said Alejandra Gomez, 34, from Mexico, who was visiting the French capital from her current home in London.

“You get a totally different perspective when you see Paris like this,” said her husband Antonio Lopez, a 39-year-old Spaniard. “I am glad they are going to do this again.”

Behind them, families were posing for a selfie, standing in the middle of the road where normally they would be putting their lives at risk.

Other people took the rare opportunity to cycle down the centre of the avenue, although at a more leisurely pace than when the Tour de France competitors tear down there at the end of the world's most famous bike race every summer.

After months of stringent security measures following the jihadist terror attacks on the city in November which killed 130 people, there was a feeling too that Sunday's car-free day was an example of Paris returning to a more relaxed way of life.

The boulevard attracts an average of 300,000 visitors every day, including many tourists. Vast crowds gather there for special occasions, when the road is also closed to traffic, including for New Year celebrations

“I love it today. There is a better atmosphere here than normal. There are lots of families here to enjoy it,” said Zoe, 13, a young Paris resident who was visiting the Champs-Elysees with her cousins from the central city of
Lyon.

“It's fantastic, people are happy and it shows. There is a party atmosphere,” said Alain De Mai, in his sixties, who was visiting from the southern French city of Marseille.