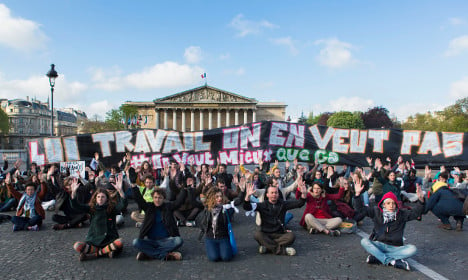 Members of Nuit Debout movement in front of the French parliament as they protest against the controversial labour reforms in Paris last week. Photo: AFP

“We are in a phase of internationalisation,” said 22-year-old Jean, who has taken part  in the protests since late March, at the “Nuit debout” (Up all night) movement's site on Place de la Republique.

The idea is to hold autonomous demonstrations on the same day — next Sunday — in many cities, especially in Europe along shared themes such as migrants, austerity and free trade.

The date was chosen also as a tribute to Spain's anti-austerity “indignados” movement, which began on May 15th, 2011.

Around 200 people on Saturday gathered at Place de la Republique to hear speakers from several countries talk about the anti-capitalist protests of the past few years, including in Athens against Greece's bailout-imposed austerity and Occupy Wall Street in New York.

The youth-led “Nuit debout” movement began on March 31st to protest the French government's proposed labour reforms and has since grown to encompass a range of grievances, from the plight of migrants to tax evasion.