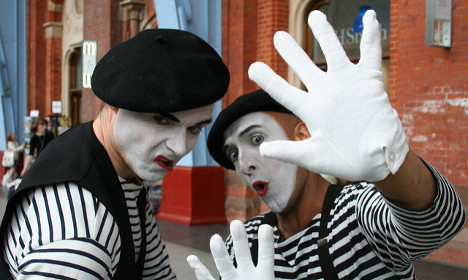 Photo: Jan Lewandowski/Flickr
Not all French people know what a “Brexit” is, at least by name. The word is being used a lot by journalists, but it's not exactly getting bandied about at my corner café here in Paris.
What most French people do seem to have, though, is an opinion on the idea of Britain leaving the EU. From what I gather, it seems to be a fairly even split between “Ne nous quittez pas” (to misquote Jacques Brel) and “bonne continuation” (to quote French people when they don't really care what happens to you next).
I'm sure that every British expat is getting lectured about the sheer impoliteness of turning our backs on our continental friends. Many French people are still convinced that we Brits are only happy when staring out at a distant Europe from the safety of the White Cliffs of Dover.
One old monsieur I met even suggested that someone near Dover was permanently sitting by a sort of tap, waiting for the order to flood the tunnel. Though I think he was still bitter because Napoleon's plans to cross the Channel never came off.
This notion of impoliteness includes, of course, the realization that without Britain, there will be a lot less money available to do things like refloat ailing European economies and subsidize French farmers. (And let's face it, anyone with a full set of taste buds is in favour of generosity towards the people who make things like Roquefort and Muscat de Rivesaltes – to name two of my own French favourites.)
France knows how much sterling gets pumped across the Channel, and doesn't want the flow to stop.
There are, of course, all the incoming refugees to deal with, but that problem is much too complex for a mere book writer like me to get into.
One thing about France's attitude towards a potential Brexit has surprised me: the amount of indifference. A few people I've talked to have made that most expressive of French noises, the pouting raspberry, accompanied perhaps by a thrust of the chin or even a shrug that informs you that the question you just asked is about as high on their list of priorities as the need to give Saturn's rings a new paint job.
These aren't just French introverts whose lives wouldn't be affected by a reduction in the size of the EU's budgets or borders. They're also outward-looking people who see equal advantages in either outcome of the referendum. Deep down, the French feel confident that life will always go on being French.
Some Parisian bankers I talked to were optimistic that Paris might oust London as a financial capital, so that all those French entrepreneurs who fled to London when François Hollande was elected would come flooding back. But they had also done a calculation of possible fluctuations in capital and trade, and had worked out that there was plenty of money to be made whether the referendum ends in “au revoir” or “Brexit? What Brexit?”.
This was the idea that inspired my new novel, Merde in Europe. The hero, Paul West, is in Brussels working for a French MEP. She says she's campaigning to keep Britain in the EU. But Paul becomes increasingly suspicious of her true motives. She is French, so she has French interests at heart – running a close second behind her own self-interest. Politicians will be politicians. So what we see in the novel is Paul rampaging through the corridors of the EU institutions wondering “can all this be real?” and asking himself whether he wants to be part of it himself, both as an individual and a UK citizen.
When you see the insane things that actually go on in Brussels, which I did by work-shadowing and interviewing eurocrats (who made me promise to change their names, nationalities and sometimes genders too), it helps you to decide where you think the future lies – in or out of the EU, or somewhere in between. I'm not going to say how I feel, but it takes Paul a whole novel to do so – and all is revealed at the end, of course.
Stephen Clarke's new novel is Merde in Europe. It is available from all open-minded booksellers. It's also been translated into French, as God Save le Brexit? (note the question mark – the French just can't decide).