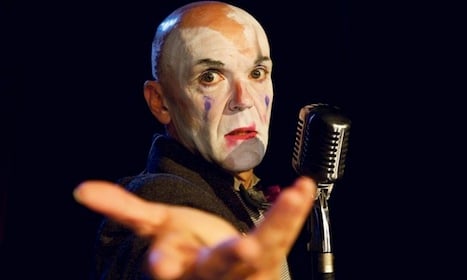 Performer from Fringe, '33 (a kabarett)- Bremner sings. Photo: The Paris Fringe
Paris is a city that's proud of its culture and arts scene – and rightly so.
However, until now, most of the international acts that perform are only at a very high level and in swanky venues that are inaccessible to a lot of us, the Théâtre du Châtelet for example, where tickets are expensive and the atmosphere is formal.
How Parisians view theatre is largely very uniform. It is regarded as such a high art form that it allows for very little variance and is particularly unaccepting of more contemporary art forms.
Well not anymore. The Paris Fringe welcomes everyone and the acts are completely diverse, with something to entertain everyone.
When will it be happening?

It will begin Monday May 23rd and continue until Sunday May 29th.

Where can I see it?

In indoor venues and outdoor spaces across a walkable part of the trendy and culturally 'happening' 9th arrondissement of Paris.

What is it all about?

It is a comedy and contemporary arts festival. All of the acts will be performed in English and the organisers’ vision is to bring people together and get everybody talking.

“Although there are already lots of English language theatre companies across Paris, the problem is that they are difficult to find out about,” Dom Douglas, one of the founders of the festival, told The Local.

He and fellow director Reka Polonyi have brought many of them together for the festival.

Who will be performing?

An enormous variety of acts from all over the world will be arriving in Paris during the week to showcase their talent.

From stand up comedy, to dance, to improvised musicals, to magic shows, to poetry readings, there is no doubt that the Fringe really is covering all bases.

Throughout the course of the week, you can expect to laugh, but also be challenged, as many of the performances will tackle modern societal issues.

One act tells the story of a homosexual man who was forced to flee his home country of Zimbabwe.

Another addresses the issue of our ‘over sharing’ culture, in the age of Facebook. While another one discusses the issues of unexpected pregnancy and living with cancer, through the medium of music.

The full programme can be downloaded here.

(Photo:Edinburgh Fringe welcomes Paris to the family via twitter)

How to I get tickets?

For tickets to performances at the Feux de la Rampe theatre, go to their website here.

Or the other theatres (Le Kibele, Theatre Trevise or the YMCA building) click here.

There will also be workshops and open mic nights, which of course will be a good chance for the public to participate and meet some of the artists.

Details of these will be being constantly updated on the Fringe website.

Numerous free street performances and activities throughout the course of the festival will be going on to get stuck into.

All discussion groups and events at Lavomatique (the Launderette) will be free.

Or, if you want to be involved in the running of the festival itself, you can volunteer too. The festival is still recruiting theatre-lovers to help out.