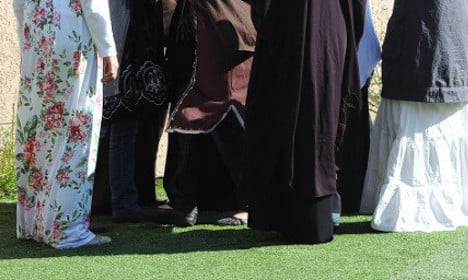 Photo: AFP
The 16-year-old was sent home this week after her headmaster took a dislike to her skirt.
The skirt – popular among some Muslim women who cover their whole body – reportedly reached beyond her knees and down to her sneakers, reported the Nouvel Obs newspaper.
The headmaster of the Seine-et-Marne school, in the outer suburbs of Paris, reportedly deemed that the skirt “conspicuously” showed religious affiliation, which is banned in schools by France's strict secularity laws.
According to the 2004 law that governs secularity in schools, veils, the Jewish kippa or large Christian crosses are all banned in educational establishments, but “discreet religious signs” are allowed.
The mother of the teenage girl has since returned to the school to complain. After a chat with the headmaster, the school has promised to discuss the matter further with the family on Monday.
“Yes, my daughter, who is Franco-Portuguese and from a Catholic family, has converted to Islam,” Marie-Christine de Sousa told the paper.
“I've always supported her choices and decisions. Earlier this year, I allowed her to wear the veil, which she takes off before going into the school. She wears long dresses for school.”
The family of the girl is already planning legal action, the paper reported.
In the meantime, the teenager, who converted to Islam a year ago, will have to find something to wear to school instead of her black H&M skirt..
France was rocked by a similar case to this in April last year when a girl with a long skirt was also barred from class.
Her story trended on Twitter across France with the hashtag #JePorteMaJupeCommeJeVeux, translated into English as “I wear my skirt as I please.”
Some suggested that long black skirts were nothing out of the ordinary provided they're worn by non-Muslims.
“Wearing a long skirt is nothing ostentatious. This is more due to mass hysteria,” Abdallah Zekri, president of the National Observatory against Islamophobia, said at the time.
The CCIF Islamophobia watchdog said this week that some 177 students were rejected from class in 2015 for outfits deemed too openly religious.