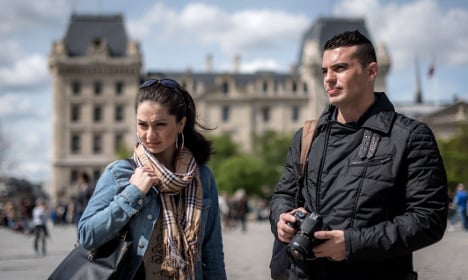 Fearing for their lives, the couple has kept a low profile since they arrived five months ago for a film festival.

“We never thought of staying,” said her husband Noorullah Azizi. “We hardly packed anything.”

But death threats back home against them and their family, they said, ruled out a return.

Golbahari was only 10 in late 2001 when she was plucked from the streets of Kabul and catapulted to stardom as the heroine of the Golden Globe-winning film “Osama”.

She had been selling magazines on the streets of the capital and witnessed the violence of the recently-toppled Taliban regime first hand when her father was beaten in front of her.

In the film, she played a girl who disguises herself as a boy during the Taliban's rule so that she can walk freely on the street.

“Osama” was a hit and made Golbahari, now 24, an instant star in her country.

“Cinema is my life,” she told AFP. “In a film, I can say everything about my people.”

He grew up in Pakistan among the millions of Afghan refugees who had fled the Soviet war of the 1980s.

Now 28, he recalls a childhood spent sleeping in a tent and working in a shoe factory, before returning to Kabul and trying his hand at a thousand and one jobs.

He finally turned to acting, where his muscular physique and square jaw brought him roles as police officers and soldiers fighting the Taliban.

“I was happy. I had everything,” he said.

Azizi and Golbahari met on Facebook and quickly fell in love, but the match was not welcomed by Azizi's family who refused to attend the marriage last September.

“They were ashamed of my wife because she is an actress and the whole world can see her photo,” he said.

A picture of Golbahari, head uncovered, at the Busan festival in South Korea drew the ire of conservatives. She was branded a prostitute on social media, adding to the family's shame.

The imam in her local village of Kapisa announced that she should not return, which Azizi said translates as: “She must die.”

Soon after, a bomb was thrown into their garden in Kabul but failed to explode. Telephone threats started to pour in, and the couple were forced to move from house to house.

In mid-November, they flew to Nantes in western France where Golbahari was appearing in a festival.

But their families, who had also received death threats, told them they had to stay away. Golbahari was thrust to stardom as the heroine in the Golden Globe-winning film “Osama”. AFP

The couple have found themselves in a decrepit shelter for asylum-seekers in Dreux, 90 kilometres (56 miles) outside Paris. Their small green and violet room looks out over a roof full of discarded rubbish.

Golbahari has struggled to cope with the forced exile. She has attempted suicide and is now on anti-depressants.

“I dreamed of living in France, but not like this,” she said.

The couple are particularly worried about running into fellow Afghans.

“It's very important that no-one recognises Marina,” said Azizi, who locks his wife in the room every time he leaves to make sure no one gets to her and carries out the death sentence passed by conservative imams a world away.

To avoid detection, Golbahari remains tightly veiled in public — a cruel twist in the tale, given the way their nightmare began.

“When you are an actor or actress in Afghanistan, or part of a film, you are accused of being an infidel, you are always in danger,” said Siddiq Barmak, the director of “Osama”, who also became a refugee in France a year ago.

Since the withdrawal of most international forces from Kabul in mid-2014, a wave of religious conservatism has washed over the country — “and not only from the Taliban”, said Barmak.

Nearly 3,700 civilians died in the ongoing conflict last year according to the UN — a record for the past decade.

The increase in violence has sparked a fresh exodus from the country, particularly among Kabul's middle-class liberals.

Golbahari's appearance at the Korean film festival coincided with two major events in the city of Kunduz — its temporary seizure by the Taliban and the bombing by US forces of a Doctors Without Borders hospital.

Back in her dank room, Golbahari sees little hope.

“Before, I dreamed of the future,” she said. “Now I think only of the past.”