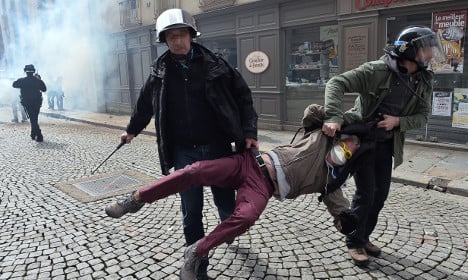 It feels a long time since January 11th 2015, when as millions of marched through the streets of Paris to mourn the victims of the terror attacks, the crowds clapped and cheered as vans of riot police snaked their way through the throng.

The incident made headlines, because it was so rare in France for the public to show such an appreciation, even warmth for the forces of law and order.

Things have deteriorated somewhat since then.

In recent weeks a hardcore minority of protesters who have attached themselves to the anti-labour reform protests have directed their anger as well as concrete blocks and homemade fireworks against the police, leaving dozens injured.

And officers have had enough. “We have gone from being embraced by the crowds after the Charlie Hebdo killings to being attacked repeatedly in the streets,” Philippe Lavenu, from leading police union Alliance, told The Local.

“We are exhausted. We are sick of this and that’s why we are calling on officers to protest on May 18th.

“We don’t deserve it. We had an incredibly tough year in 2015 with the two terror attacks. Officers have been working on their days off and without holidays and they are worn out,” said Lavenu.

During the recent protests much of the violence directed towards police has been carried out by anti-capitalists or anarchists, groups like “Black Block” who in the words of Lavenu are only interested in “attacking the police and smashing up” banks and other symbols of wealth.

“We are the representatives of the state, and the state to them means capitalism. I am sure they know absolutely nothing about the labour laws, they are just against everything,” he said.

But as well as the hardcore anti-capitalists who have been involved in violent protests in many first world countries, police say the “anti-cop” sentiment in France has been whipped up by leftist trade unions.

The hardline CGT union recently printed two provocative posters, one which showed policeman standing in pools of blood, supposedly from wounds they had inflicted on protesters with the word “Stop!”.

Alliance’s Lavenu accuses the radical unions of forgetting their responsibilities and organising a hate campaign against them.

“Even at a recent anti-labour law protests we could hear trade union speakers talking about police violence. It’s hurtful,” he said.

In a press release Alliance union condemned the fact the police are being made out to be “wild brutes who blindly punch young people” as well as the ideology that encourages hatred and violence against police.”

But the problem police in France face is that officers continue to be caught on camera sticking the boot in to protesters, for want of a better expression.

The specialist CRS police who deal with public disorder have a reputation of taking no prisoners and videos on YouTube showing an officer punching a young high school student in the head or kicking a woman in the stomach will hardly ease tensions.

Recent high profile incidents, such as the eco-protestor who was killed by a police stun grenade have also helped to instill a hatred for police among hardline militant groups.

French youths also have bitter memories of the death of two youths in 2005, who were electrocuted at a substation as they ran from police. Their deaths sparked nationwide riots.

But Lavenu insists it is wrong to talk of “police violence”.

“The case of the officer punching a school pupil was not police violence it was violence by one individual officer, who needs to explain himself before a court,” he said. “There is a judicial process for that.

“No one talks about protester violence, even though the numbers of injured are far higher among officers than demonstrators.”

Since the protests began some 300 officers have been injured, forcing the government to repeatedly condemn protesters and call for calm.

Despite the police anger, Fabien Jobard, a specialist on policing matters from France’s National Centre of Scientific Research said the police should be expected to deal with trouble.

“We need to put things in perspective. There is a confrontation between certain people who want to attack the police and the police who respond.

“This is the job of the police. They are paid for that with tax payers money.”