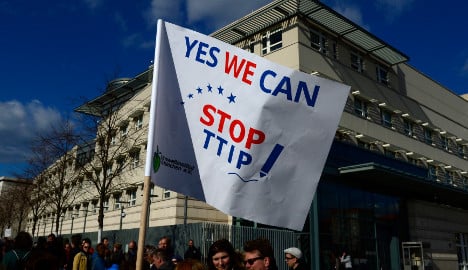 Hollande warned that Paris would reject the Transatlantic Trade and Investment Partnership (TTIP) “at this stage” because his country opposes “unregulated free trade.”

“Never would we accept the undermining of the essential principles of our agriculture, our culture, of mutual access to public markets,” Hollande told a left-wing political conference.

Earlier French trade secretary Matthias Fekl warned that the talks could grind to a halt because of Washington's reluctance to make concessions.

“In view of the United States' state of mind today, that seems to be the most likely option,” said Fekl when asked if the talks on a Transatlantic Trade and Investment Partnership, which began in 2013, could have to stop.

“Europe is offering a lot and we are getting very little in return. This is unacceptable,” said Fekl, who negotiates trade deals on behalf of France.

Fekl's comments reflect deep suspicion in Europe that the deal will erode ecological and health regulations to the advantage of big business.

Washington and Brussels want the mega-deal completed this year before US President Barack Obama leaves office, but it has faced mounting opposition on both sides of the Atlantic.

On Monday, environmental pressure group Greenpeace released a trove of leaked documents about the closed-door negotiations, charging that a deal would inflict a dangerous lack of standards on US and European consumers.

However, the European Commission, which negotiates trade deals on behalf of the 28 EU member states, said Greenpeace was “flatly wrong” in its interpretation of the documents.

Fekl has repeatedly expressed his frustration with the way the US has handled the talks around the deal.

In September last year he warned Washington that Paris was on the verge of pulling the plug on the negotiations for the Transatlantic Trade and Investment Partnership (TTIP).

The controversial treaty has long been the cause of angst in France and Fekl gave the clearest indication yet that Paris may not be willing to go on with talks that began in July 2013.

He was angry that France's main concerns are not being taken into account and that the negotiations have so far prioritized American wishes over European ones.

In an interview with French newspaper Sud Ouest, Fekl said the negotiations “either weren't advancing or were progressing in the wrong direction”.

“If nothing changes, it will show that there isn't the will to achieve mutually beneficial negotiations. France will consider all options including an outright termination of negotiations,” Fekl warned.

The secretary of state said that the US had to make greater efforts as the EU has done and take into account France's concerns.

“We do not feel the US is taking into account our wishes around services, nor on the issue of private arbitration courts. The negotiations should certainly enable our small and medium sized companies and farmers to have access to the markets,” he said.