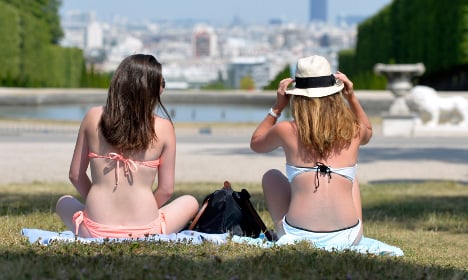 The parks will stay open through the night on Fridays and Saturdays, starting this weekend.

Even better, during July and August they will remain open around the clock seven days a week so that locals can make the most of every last minute of summer by relaxing in the sunshine.

The news was revealed by an internal Town Hall document seen by Le Parisien newspaper.

So where should you head to after a long day sweltering in the office? These nine large sites join the list of 127 smaller parks and gardens (out of 490) already open to the public at night. The 24-hour green spaces are dotted around the city, so there's plenty of choice when you're looking for a spot for a picnic.

Last year, the city experimented with opening a few of its parks all night long. During July's heat wave, five large parks (Buttes-Chaumont, Martin-Luther-King, Montsouris, André Citroën and Monceau) were left open to allow Parisians to cool down, after the Green Party pushed for the move.

The measure proved so popular that it was continued on Thursday, Friday and Saturday evenings until September in four of these parks.

But while most locals will welcome Wednesday's news, not everyone is happy. Almost 700 residents living close to Parc Montsouris in the 14th arrondissement have signed a petition against the project, complaining about the rubbish and noise.

“When the City Hall asked my opinion, I said that I was opposed to the opening of the Parc André Citroën,” said Philippe Goujon, deputy mayor of the 15th arrondissement. “Leaving the park open all night is a risk.”

The internal document acknowledged that there had been “some damage” to fire hydrants and “some reports of disturbance of the peace”, particularly the use of scooters, during last year's experiment, but Hidalgo is determined that the late openings won't affect local residents.

Extra rubbish bins will be provided and there will also be extra security teams on patrol in order to avoid any disturbance from the extended opening hours.