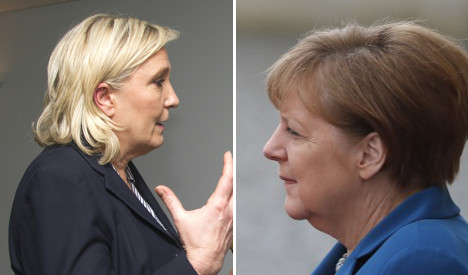 Le Pen versus Merkel. Only one winner surely. Photo: AFP

German Chancellor Angela Merkel said on Tuesday she would do what she can to help curb the rise of France's National Front
(FN), as support surges for far-right parties across Europe.

“I will make my contribution towards ensuring that other political forces are stronger than the National Front,” she told students attending the French high school in Berlin.

Merkel, who rarely comments on neighbouring France's political scene, said that in Germany too, the rise of the far-right was a phenomenon that “we have to deal with”.

“We see that there are political forces with very negative rhetoric on Europe,” she said, referring to the German populist party Alternative for Germany (AfD).

“We have to ensure that Europe is a project that people understand,” she said, adding that a key message that has to hit home is that “it's better with Europe than without Europe”.

She slammed the German leader's intervention as “an outrageous and humiliating interference in our internal affairs.”

Merkel's promise to influence events also displayed “the submission of our country to Germany,” she added, referring mockingly to French President Francois Hollande as a “vice chancellor”.

The French National front and the German AfD have differing economic views but are joined in their opposition to the European Union.

Formed only three years ago on a eurosceptic platform, AfD is now Germany's third strongest party, according to a recent opinion poll.

The populist upstart outfit has shifted its rhetoric to one that rails against the influx of 1.1 million asylum seekers in 2015, and last weekend adopted an anti-Islam platform.

Le Pen has overseen an unprecedented rise in her party's fortunes and many pollsters predict the FN will make it to the second round of the French presidential election next year.