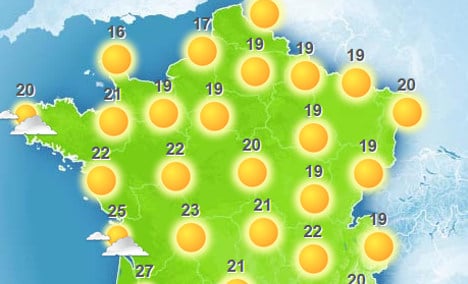 Tens of thousands of French workers will head off for a long weekend on Wednesday evening, safe in the knowledge that they will be pretty much guaranteed some sun, no matter where they go.

With Thursday a public holiday, many workers are either given or take the Friday off, to turn it into a long weekend of four days or a “pont” (bridge) as its known in French.

After a pretty slow start to the spring across France, there was some good news at last just in time for the jour férié. Clear skies are predicted across the country, with temperatures reaching up to 27C in the south west on Thursday.

While clouds may separate parts of the west of the country from the sun, elsewhere sun-seekers should be able to get a little bit of colour into their cheeks.

There's good news for holidaymakers and people living in northern and eastern France as the good weather will largely continue throughout Friday and Saturday, with only western France having a small chance of rain.

(Saturday to be a little cloudier but still mostly sunny. Photo: Meteo France)

But there are downsides to all the sun. The good weather will encourage many to head away for the break

According to French road traffic company Bison Futé, “the Ascension period is traditionally a very attractive one for weekend breaks” and so they have warned that the roads across France will be “very busy” on Wednesday evening and on Sunday evening, when people will be heading off or back from their holidays.

Unfortunately it doesn't look like these dry days are going to last until Sunday, when storms are due to sweep across the country. Just to make the return to work on Monday seem all the more miserable.