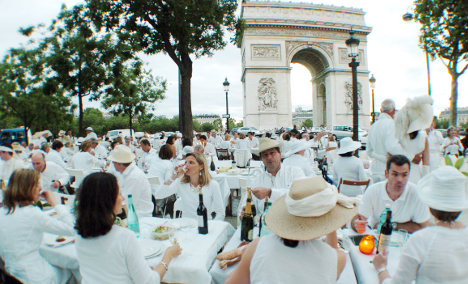 The French eat together, that's one thing we could learn from. Photo: AFP

Despite the invasion of American fast food chains and a youth culture that is more open to Anglo influences, the traditional French eating habits still live on, even though many have predicted their downfall.

France is still a country where eating is seen as pleasure rather than just giving the body what it needs to get through the day.

As a result the French have a different way of doing things than many other countries. Here are a few of the eating habits we could all learn from.

Fixed meal times and no snacks

The French have always stuck to three meals a day and generally don’t do food outside these set meals. Children usually have a small snack or goûter after school – a piece of fruit or a cake – but this is limited to a specific time, and adults generally don’t snack.

For the French it's OK to be hungry between these three meal times and it doesn't mean raiding the fridge or going out to buy chocolate.

An American sociologist visiting France in the 1950s took offence and thought that setting meal times was for animals in the zoo. Well if that's the case, when it comes to food the zoo is far better than the wild. Some would say the custom has its drawbacks, and the limited opening hours of French restaurants are one reason for the huge popularity of fast food chains, but the fact many of the fast food chains are deserted between meal times shows the three-a-day culture has stuck.

For the French the main meal of the day is lunch, with dinner sometimes just reduced to an afterthought. It makes sense to given that we've got most of the rest of the day to get through and more time to digest the meal. A recent survey suggested the French take more time for lunch than other countries. Although it also means many are falling asleep at their desks apparently.

The reason why the three meals a day regime lives on is because the French like to eat together. And that's not just families, it goes for work colleagues too. While in the UK or the US, a colleague would likely say “Just popping out for a sandwich”, in France your colleagues might see that as strange, sad, or even rude. The Crédoc consumer studies and research institute reported that 80 percent of meals are taken with other people. For the French eating is simply something that is far better shared.

Even socially the French are more likely to go out for dinner than drinks. It's almost unthinkable to go “for a few drinks” on a night without having dinner. Eating is certainly not cheating on a Friday night in France.

Many studies have shown that if we are given more food, we eat it – regardless of whether we are already full. Americans in particular are famed for their gigantic servings, and with more people leading largely sedentary lifestyles than in the past, they’re consuming more calories than they need.

You may feel a bit ripped off when a Parisian cafe gives you a stingy-looking portion, but you’ll probably also notice that it fills you up anyway.

Don't expect to come across an “all you can eat” deal in France. The French follow a different theory which is more like “all you need to eat”.

There was uproar recently when French restaurants were forced by a new law to make doggy bags available in order to cut food waste. Chefs were affronted. They say there's never really been any need for them.

Restaurants in Anglo countries serve up cheap but not so nutritious meals like burgers and hot dogs to kids, but French children are expected to eat the same food as adults.

This instills healthy habits from an early age and encourages them to be more open to trying new foods – few allowances are made for ‘picky eaters’ as French parents teach healthy eating as a skill to be taught from a young age. Even in schools, healthy lunches are a priority and three-course, balanced meals are de rigueur in canteens.

Traditional French cuisine relies on fruit, vegetables and meat either grown at home or from local farms. Of course, supermarkets now offer many imported varieties and the trend for processed ready meals are growing, but farmers’ markets are still popular and there is a keen focus on the ‘terroir’ or origin of the food.

Buying at least some locally grown food is not only good for the environment, but is generally better for you as it is fresher and has had less time for nutrients to be lost.

Still or sparkling water is the preferred accompaniment to a meal.

Obviously many French will also have wine with their meals – but it will be normally be a small glass or two and not the size a bucket, like you see in the UK. Apart from giant wine glasses another thing you will rarely see on a dinner table in France is a pint of beer or fizzy drinks.

Eat at the table

Food is made to be savoured and it's also made to be eaten at the table. Well at least that's what the French think and we're right behind them. And the same even goes for kids too. The French introduce them to the table from a very young age, so they get to know it quite well, by the time it comes to taking them to a restaurant.

Here it's far less common to see people eat a meal at their desks or slumped in front of the TV.

One study from 2010 revealed the French spend two hours and 22 minutes each day eating. Essentially that's because they like it. While we understand that being trapped at the table for hours during a French dinner party can feel like torture, they do have it right when it comes to taking the time to eat.

How often do you get asked to hurry up and vacate your table in a French restaurant? Isn't that the way it should be?

Rather than have one big main meal, the French, although the culture is changing slightly on this one, will often have the three traditional courses of start, main meal and desert. You can probably throw in the cheese too. That's because they are prepared to spend the time on eating.

The portions may be smaller, but no need to panic, you'll be full.

The French may love their patisseries, but treats like eclairs or sugary cakes are usually reserved for special occasions. In many English and American households it’s a habit to have a pudding after most meals, but the French tend to steer clear of dessert, or opt for a healthy but filling choice like fruit or yoghurt.

No food on the go

You won't see many people in France walking with a coke in one hand and a baguette in the other. That's because they don't really like multi-tasking when it comes to food or coffee. They'd just rather sit down – and you can't blame them.