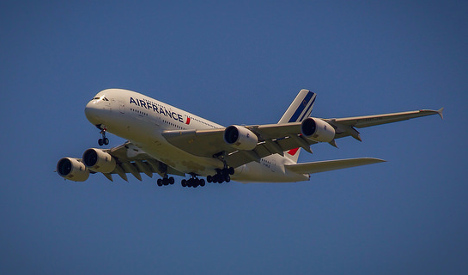 Photo: Jonathon Gross/Flickr
Typhoon fighter jets were scrambled late Monday night to identify an unresponsive civilian aircraft, the Ministry of Defence said, causing sonic booms over Yorkshire in northern England.
The Air France flight from Charles de Gaulle airport in Paris to Newcastle in northeast England had a radio fault, the French airline said.
“Air France confirms that due to a radio communication problem AF 1558 had to be accompanied by two British fighter aircraft,” it said on its UK official Twitter account.
“Safety of clients and crew is an absolute priority.”
A spokesman for Britain's Royal Air Force said: “Quick reaction alert Typhoon aircraft were launched from RAF Coningsby to identify an unresponsive civilian aircraft.
“Communications were re-established and the aircraft has been safely landed.”
North Yorkshire police tweeted to reassure people there was no danger from the explosive sounds.
“Confirmation from RAF that loud bangs heard across the county were sonic booms from RAF Typhoon jets. No cause for concern,” it said.
A sonic boom shockwave is caused when an aircraft breaks the speed of sound: 768 miles (1,236 kilometres) per hour.