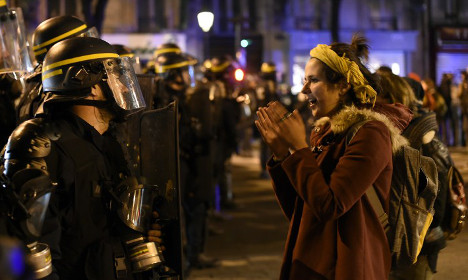 The city’s police chiefs have issued an order that bans noise in the square after 10pm and alcohol from 5pm.

The movement which was born out of the street protests against the controversial labour reform bill, that will be presented to parliament on Tuesday, has seen throngs fill the square on a nightly basis.

However it also been marred by violence with a minority of extremists or casseurs (which literally translates as “breakers”) as they are known in France using the movement as cover to smash up banks and provoke trouble with police.

On Sunday night those involved in Nuit Debout tried to form a human chain between riot police and the casseurs, but it proved too dangerous.

Some have compared Nuit Debout to the Occupy movement and the Indignados in Spain that formed the base for the new Podemos political party.

But others have noted how the numbers in the square are often swelled by hundreds of young people who appear to have come for to drink and to party.

And the police have had enough. On May 2nd, a day after the square witnessed yet more violent clashes between police and protesters, the prefecture issued a statement announcing limits would be placed on certain activities linked to the gathering.

Notably the music that has been blaring out from parts of the square is banned between 10pm and 7am.

Restrictions are even tighter around alcohol consumption, which is banned between 5pm and 7am.

The order also bans the carrying of any objects that could be used as projectiles to be thrown at police, including glass bottles.

Police reiterated their condemnation for the damage caused by rioters and the repeated attacks against officers during recent weeks.

On Monday night the demonstrators appeared to follow the new rules with music sound systems switched off at 10pm. By around 11.30pm there were still around 150 people in the square but all was calm.

Police say demonstrators can stay in the square after 10pm as long as there are no disturbances to neighbours.