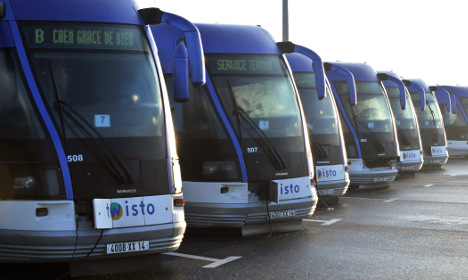 Twisto buses. Photo: AFP
Bus drivers for the Twisto transport company in Caen, northern France, have been told to keep a tally of how many migrants ride their bus, reported the Normandy arm of the France Bleu channel.
The bus line runs from the centre of Caen to the Ouistréham ferry terminal (see map below), which in recent months has become a port to where more and more migrants are heading in an attempt to get to the UK.
The channel reported that memos had been passed among the drivers with boxes to tick marked “Number of migrants inspected” and “Number of migrants booked” (see below).

A separate handwritten note told drivers to keep track of where they suspect the migrants might be living, by noting where the migrants got off the bus.
The note, understood to have come from bosses at Twisto, suggests that the order for “migrant tallies” had come from police headquarters.
The CGT union has got hold of the documents and launched a complaint with the Committee for Hygiene, Security and Working Conditions (CHSCT)
“The drivers have alerted us to this – they are very uncomfortable and some have refused to take part in the counting,” Samuel Varnier of the union told France Bleu.
The local police chief, Laurent Fiscus, denied to the channel that he had ever sent the order to the Twisto bus company, but didn't rule out that such information would be useful to authorities.
“Public transport drivers and conductors can provide information whether it's about migrants or other problems,” he said. “The national and municipal police need this kind of information.”
In recent months, more and more migrants are giving up on trying to sneak on a boat or cross-Channel train in Calais – where security is becoming ever tighter – and are instead heading to other ports and coastal towns along the north coast of France.
In April last year, a union representing bus drivers in Montpellier, southern France, sparked outrage after it proposed the creation of a separate bus service for Roma people following complaints about the “unbearable” smell.