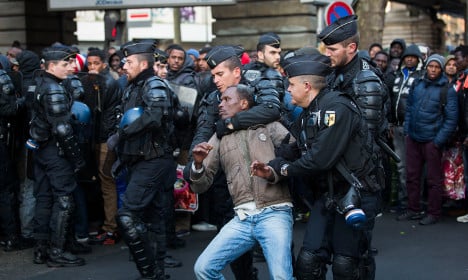 All photos: AFP
Shortly after 6am, people who had been staying in the tightly packed tents under an elevated section of the Stalingrad station in the north of Paris began boarding buses to take them to reception centres.
The evacuation passed off largely without incident, authorities said.
Although only around 500 people had been counted at the camp the night before, police said around 1,350 people had gathered there Monday to be re-located to accommodation centres, suggesting that migrants from other parts of Paris had swelled their numbers.
Around 150 police officers were involved in the operation to relocate the migrants, mostly from Sudan and Afghanistan. “We're happy to leave,” said Moustafa, a 24-year-old Afghan who had been at the camp for a month.
“There were fights every night at the camp.”
Another Afghan, Abdullah, said he hoped to stay in Paris long-term. “That is where the rest of the community is and there is work here.”
He said he had given up hope of reaching Britain, the country which many of his compatriots try to reach from France.
“It's a good country here,” he said. Flimsy tents were packed into a small area around the station and the overflowing rubbish bins and piles of mattresses indicated that conditions at the camp had deteriorated in recent weeks.
Jean-Francois Carenco, the prefect of the Ile de France area that includes Paris, said he expected the migrants to request asylum.
“Those who do not request asylum or who behave badly will be expelled,” he said. “France is not a place for disorder and chaos.”
Nearly 80,000 people applied for asylum in France in 2015, but it has been affected less than its European neighbours by the mass influx of migrants over the last 18 months.
The main migrant camp in France, the so-called “Jungle” in the northern port of Calais, now holds around 5,000 people, according to charity workers, but the government says that figure is vastly inflated.