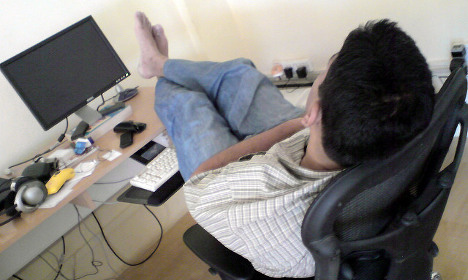 Photo: Tahir Hashmi/Flickr
You're probably familiar with the term “burnout” – which has led to many exhausted employees needing time off or quitting their jobs – but have you heard of a “bore out”?
That's the word (yes, in English) that the French media are using for what they're calling an unprecedented court case in France.
The case revolves around 44-year-old Parisian Frédéric Desnard, who quit his supposed managerial role in a perfume business because he was bored out of his mind.
He accuses his former employers of giving him menial tasks at work for a full four years, which he describes as “a descent into hell”, reported 20 Minutes newspaper.
The Frenchman said he was relegated to doing tasks that had nothing to do with his job as a manager after being stripped of his real responsibilities.
He claims he was left “destroyed” and would cry constantly.
“I was depressed, and ashamed of being paid for doing nothing,” he told Le Point newspaper.
The lack of stimulating work took its toll on Desnard, who quit in late 2014 after suffering from anxiety, depression, and an epileptic fit while driving.
The lawyer of the perfume company, however, responded by saying that Desnard “never said anything about being bored during the four-year period”.
“And if he actually had nothing to do over these years, why didn't he mention it?” the lawyer added.
The case will be taken on in an employment tribunal in Paris on Monday.
Desnard is seeking over €360,000 in damages and missed pay, which included holiday pay and missing out on a potential promotion.
While the French media has been referring to it as the first case of a “bore out” in French court history, one French researcher estimated that around 30 percent of French workers suffer from “bore outs”, reported France Info.

Jean Claud Delgènes whose firm Technologia specializes in risks to employees said the phenomenon of “bore-out” can occur when a member of staff feels they have no mobility to progress but is also unwilling to take the risk of changing jobs.

“The problem today with boredom at work is that people are afraid to leave their jobs to do something else,” he told Europe 1 radio.

And the reasons are pretty straightforward: high unemployment and the difficulty of making yourself stand out in the labour market.

Perhaps the perfume worker was inspired by another Frenchman, Charles Simon, who made waves in France last year after it emerged he had been paid more than €5,000 a month by state rail operator SNCF over a period of 12 years, despite not working for a single day.
He then demanded to be paid €500,000 compensation for effectively being cut adrift, albeit with his salary intact.